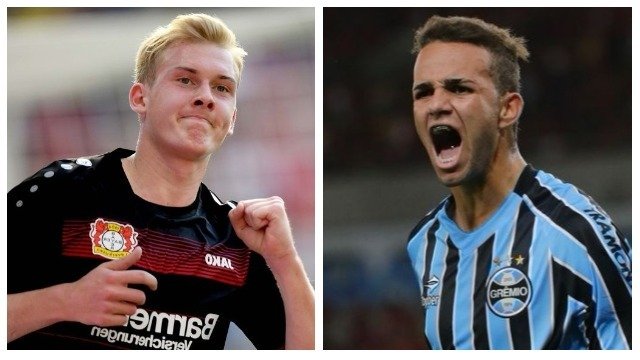 With Philippe Coutinho out of the picture and Liverpool shopping for a replacement, the name of Bayer Leverkusen winger Julian Brandt has come up again with Reds boss Jurgen Klopp a known admirer of the 21-year old winger.

While it remains unlikely that the Anfield outfit will draft in anymore player’s this January after splashing the cash to finally bring Southampton defender Virgil van Dijk to Merseyside, the club is keeping their options open — which, apparently, is the exact opposite of what Brandt is doing.

“Julian’s objective is to play in Europe with Leverkusen next season,” said his father and agent Jurgen Brandt, speaking to German media outlet SPORT BILD. “He’ll definitely be here until 2019,” stressed the German, effectively ruling out a move to England or anywhere else before adding, “Julian feels he has unfinished business at Leverkusen.”

Having snapped Manchester City’s unbeaten streak the week before, Liverpool turned right around and lost to bottom of the barrel Swansea City on Monday night. Where City came to play football, the Jacks were more than happy to just sit back and wait for their chances as Alfie Mawson’s first half strike proved to be the difference. More than content to sit behind the ball, the Welsh side threw off the visitors high-octane pressing game — the kind of match that cried out for a Coutinhoesque playmaker.

The Reds, of course, have been linked to a few this month with Leicester City’s Riyad Mahrez one of the more notable, but another familiar name has cropped up again in Gremio striker Luan. The Brazilian, who has been linked with a move to Merseyside in the past, proved that he has what it takes to play at the top level when he was named Player of the Tournament as the Porto Alegre club claimed the Copa Libertadores last season, but if this isn’t just idle chatter, it’s about time we let him know.

“I always said that I would leave it to Gremio and to my agent, and if they had something concrete, they should talk to me,” explained Luan. “No-one has come to me, so there is nothing. It has to be good for me, it has to be good for Gremio. I will not rush to want to leave soon, just like in the middle of last year,” added the Brazilian, throwing shade on the prospect of leaving. “Now it’s the start of the season and I want to regain my form and rhythm to play. What I know is that I want to play the next game as soon as possible here at Gremio.”