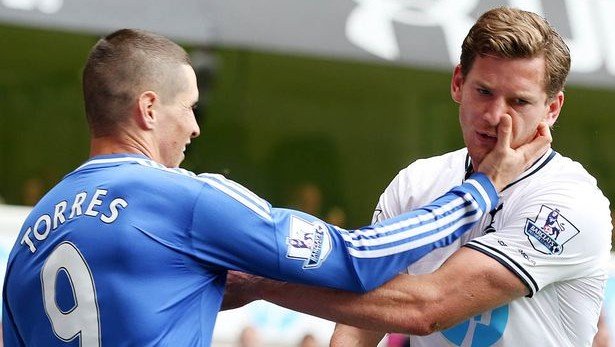 It’s not often that I talk about other teams or incidents involving non-Liverpool players, but this latest event has obviously left an impression on me and many other football fans who feel aggrieved by the double standards of the Football Association. I’m not one to trumpet conspiracy theories, but I see little difference between the actions of the Torres and that of Luis Suarez. The controversial Uruguayan was banned for 10 matches for biting Chelsea defender Branislav Ivanovic after retrospective action was taken against the striker when video evidence clearly showed his rather odd, but still violent, conduct.

The bite, which went without notice by the match officials at the time, was punished retroactively with a lengthy ban due to “exceptional circumstances”.

Following this, and a number of other high profile incidents last season, the Football Association is piloting a new system this season in which incidents not seen by the match official can be sent to a three-man panel of former referees to review and decide if action should be taken. The fact that Torres, who was shown his second yellow card nine-minutes from fulltime and was automatically issued a one match ban, is irrespective of the matter at hand.

Under the old system, which was used to issue bans to both Suarez and Eden Hazard, action could only be taken if the referee, who had not seen the infraction during regular time, reviewed footage post-match and decided that they would have taken action had they seen the infraction during normal play. Under both systems, if any match official saw even part of the infraction, the FA was unable to take further action unless the matter was deemed an “exceptional circumstance”.

The altercation, which occurred five minutes into the second half, clearly shows the Spaniard scratching or gouging the face of Vertonghen. Even though referee Mike Dean – who booked Torres for tripping the Belgian in the buildup to the incident – had not seen it happen, the assistant referee closest to action stated that he had seen “the coming together of the two players, albeit not in its entirety.” Since the assistant ref couldn’t clearly see any infraction, no action was taken at the time.

While the Uruguayan was punished after video was viewed post-match, Torres escaped punishment due to a match official seeing the Spaniard raise his hand to Vertonghen — though the entirety or the severity of the incident was not seen by the assistant referee. This fact has lead the FA to conclude that it could not refer to the three match panel for further review. No set of rules is perfect, but under both systems, the FA does reserve the right to review “exceptional circumstances” – a right they inexplicably chose not to exercise.

This isn’t a rallying cry for Torres to be banned or an opinion from on-high expunging on the morality of the situation and condemning the Spaniard. Tempers flare in football and sometimes there are off-color incidents that mar the game – that’s not what this is about. The FA choosing not to take action when video evidence clearly shows violent conduct – which carries with it a standard three match ban – only furthers the trend of frustrating double standards from the governing body. Who decided that a bite is worse than a scratch? Jermain Defoe was handed a mere yellow card for biting Javier Macherano due to the incident being seen by a match official, while Suarez’s more discreet chomp is punished with a 10-match ban retroactively – where does it stop?

An FA statement regarding the incident read: “In these particular circumstances, in line with the FA’s policy on when retrospective action may be taken, reviewed this summer by the game’s stakeholders no action may be taken.” As they continue to deal in inconsistencies, they may want to retroactively review their policy on retroactive action lest they come out of this season with even less credibility than they had before.

What’s the deal here? Did El Nino get off lightly? Does the FA have any clue what they’re doing? Let us know in the comments or his us up on Facebook or Twitter. We’re interested to hear what you think.