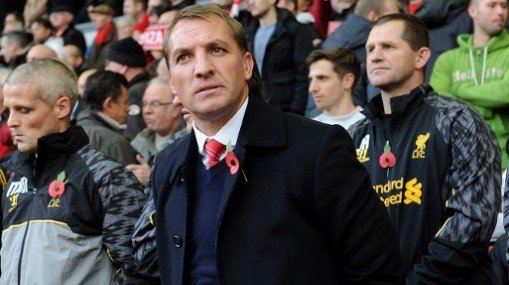 This is exactly how you want to head into an international break; after losing out to Arsenal last weekend, the Reds responded by thrasing Fulham by four unanswered goals to cement their position in the top four over the break. Brendan Rodgers, in his post match interview, didn’t sound surprised in the least.

“You’ve got to give massive credit to the players because they’ve got to put in the work and they’re doing it” said the Reds boss. “We played very well. Our appetite in the game was outstanding – there was a real hunger to get the ball. We had over 30 shots on goal so it was a really dominant performance, very pleasing.” This was the fourth time this season that Liverpool scored three or more goals in a match and their league position is a reflection of their proficiency in front of the net.

The goals continue to rain down; since Luis Suarez returned from his ten match ban, the Reds have scored an astounding 16 goals in only 6 matches.

What’s even more astounding is that Suarez and strike partner Daniel Sturridge have combined for 12 of them. The Uruguayan was on the double today and the 4 goals the Reds scored over doubled their season average of 1.90 goals per game.

Liverpool took 32 shots today, but could only manage to get less than half — an unremarkable 46% — on target compared to their normal 51%. Thankfully it didn’t punish us in the least and 1 of those 4 goals came from a set-piece which brings our tally up to 6 on the season or just a whisker over 1 every 2 matches. The return of Coutinho to the starting line-up helped create 22 chances on the day. The Brazilian played only the closing 45 minutes last weekend at the Emirates, and though Arsenal were clearly superior to both Liverpool and their opponents today, the Reds creating 12 more chances with the playmaker in the side isn’t entirely coincidence.

Brendan Rodgers is all about the possession and Liverpool held 63% of it as they ran rampant. Previous to yesterdays match, the season average was a respectable 52% with a season low 44% coming surprisingly not in the loss to either Arsenal or Southampton, but in the draw with Swansea. Over the course of the 90 minutes, Liverpool managed to maintain a 90% pass accuracy — bettering their season average of 83% — and kept on par with a 19m average pass length.

Retaining possession wasn’t all about moving the ball though. On the back end, Liverpool won 56% of their duels, a 1% increase over their previous matches this campaign, including 19/23 tackles and 8/14 aerial battles. Fulham didn’t manage much going forward to be fair, but the switch to four at the back led to 8 interceptions, 20 clearances and 1 block. How this compares to the 3 at the back we saw earlier in the see, and may see again the future, is a topic for another day.

Still, Rodgers refuses to be drawn into the hype surrounding the Reds — or the adulation raining down from the stands. “We’re just taking it game by game. The evidence we’ve shown, that’s seven games we’ve now won” enthused the Liverpool boss, and with his side averaging over two points per game, they remain on-course to finish in the top four.

There’s still a lot of season left to play, but results have been more than favourable. Some might say that Liverpool have had an relatively easier fixture list than some, but with all the upsets floating around — with Newcastle upsetting Chelsea and Arsenal losing out Aston Villa being prime examples — the old adage that no match is easy continues to ring true.

The fact that you can only beat the opponent put in front of you also hasn’t changed and Liverpool continue to do that with aplomb. “When I first came in here, there was vulnerability in games like this – there seemed to be nervousness around the group for some reason” said the boss, who continued, “But over time, our mentality and focus in the games is good, and we’re becoming relentless in these types of games. That’s what Liverpool is about; the energy and that commitment to winning games are there.”

There’s no reason to get carried away quite yet — December, when the Reds face Tottenham, Manchester City and Chelsea within the span of two weeks, will well and truly tell the tale. Until then, it’s nice to look down the table at those below and have a real sense that we could very well be doing the same in May.