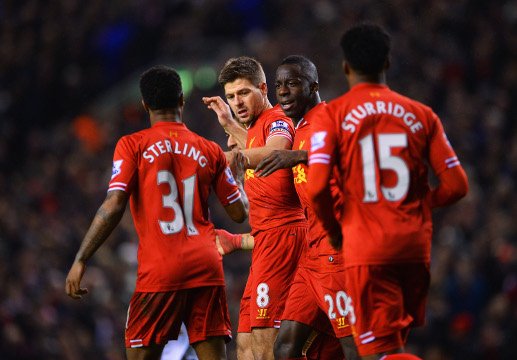 It looked to be one of those days from the get-go with Paul Lambert’s side showing that there’s still a lot of fight left in the Midlanders and had they not come up against a team as determined as Liverpool, they may have left Anfield with all three points. A draw is always better than a loss, but Brendan Rodgers will be looking down the table with some anxiety when the Sunday kick-offs roll around — it’s just that tight at the top.

Yesterday’s draw leaves a mere two point gap between the Reds and closest chasers, and cross-town rivals, Everton who meet West Bromwich Albion tomorrow. Despite the dropped points, Rodgers will be able to take heart from the spirit his side showed; clawing back a two goal deficit is never easy.

What will be worrying the Northern Irishman though is the manner in which the Reds conceded. They were counting their blessings when Gabriel Agbonlahor shot wide after racing through and when Ashley Westwood could only shoot straight at Simon Mignolet, but their luck ran out not long after when Agbonlahor, lively in the opening exchanges, evaded the attentions to Kolo Toure and sent in a low cross for Andreas Weimann to prod home with Steven Gerrard, the player who should have tracked the forward, nowhere to be seen.

With primary owner John W. Henry in town, Rodgers decided to showcase Liverpool’s attacking threat with a 4-2-4 formation with the Captain and Jordan Henderson holding down the midfield; it worked about as good as it sounds. Both players were absolutely nullified as Villa bypassed them time and again with acres of space on the flanks to run into. Both Aly Cissokho and Glen Johnson continued their collective poor run of form and were culpable, along with Simon Mignolet, for the visitors second.

Attacking fullbacks get caught out of position on occasion — that’s just the way it is — but with Cissokho so far out of the picture that he might as well have been in Goodison Park, Agbonlahor was given a more than generous amount of time to whip in a cross. Although it was unchallenged, neither Mignolet, who took a flap at it, or Johnson, who tried to head it away, could clear the ball away and Christian Benteke was on hand to head in an absolute gift of a goal.

Up to this point, the match was smacking of last seasons loss with Villa absolutely bossing proceedings, but that’s where the similarities end; Liverpool are a vastly different monster this season and Sturridge would pull the Reds back within one when he latched onto Henderson’s backheel pass after some excellent build-up play and the striker would finish off the move with aplomb, cooly finding the back of the net with Villains ‘keeper Brad Guzan well beaten.

A tactical switch at halftime corrected the mistakes of the first half, and with Lucas on for Coutinho and Gerrard pushed forward, the Reds were level within 10 minutes of the restart. The Captain knows how to play a pass and his lovely diagonal ball found Luis Suarez streaking into the box before being upended by Guzan — who was adamant that no contact was made — leaving referee Jonathan Moss with no choice but to point to the spot. Gerrard coolly converted in front of the Kop and from there it the Reds looked the more likely to go on and win it.

Although he was aggrieved by the penalty, Guzan would be the hero as Brendan Rodgers side looked for the go-ahead. Daniel Sturridge saw his tame shot easily saved by the American before Suarez blasted an effort straight at him and Henderson came agonizingly close with a low shot only to have it parried away at the last second. Joe Allen was introduced after an injury to Lucas sent the Brazilian to the treatment table, and from then on out, the tempo slowed as Villa hung out for a vital point at Anfield.

If ever there was a time to have Henry in the stands, this was it. A case can certainly be made for reinforcements after conceding five goals between last weekends meeting with Stoke City and yesterdays with Villa; still, taking four points from a pair of fixtures that we took absolutely none from last campaign shows that progress is being made — and if we want it to continue, we’d like a fullback, a holding midfielder and a left sided attacker, please Mr. Henry.

We’ll take all of those before the end of January if it’s not too much of a bother.

Surprised to see us claw it back? Or did you know that Liverpool wouldn’t take it lying down? Let us know what you thought of the match in the comments section.