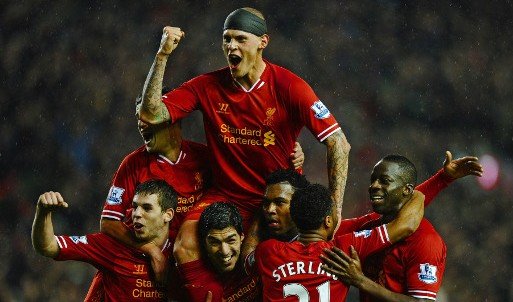 A thumping header from Reds captain Steven Gerrard opened the scoring in the 21st minute as Brendan Rodgers men started to exert their influence on proceedings and two goals in two minutes from striker Daniel Sturridge put the match out of reach before the halftime whistle was blown. The other half of the SAS partnership in Luis Suarez capped off a memorable night early in the second period with a 50-yard dash before slotting past Tim Howard and relegating the remaining 40-minutes to mere formality.

If you’re a Blue on Merseyside tonight, you’re probably going to swerve the pub on the way home. For all the good work Roberto Martinez has done at Goodison Park this campaign, there is very little to smile about for the Spaniard tonight having puffed out his chest so dramatically in the buildup to this encounter — his side were well and truly outdone by their hosts.

Ross Barkley blazed over within 60 seconds of kick-off as the visitors fired the opening salvo, but chances would be few and far between for Blues from then on out as the hosts turned the screw. Jordan Henderson tested Everton Tim Howard with a stinging volley, Luis Suarez saw his curling effort knocked away by the American and Raheem Sterling’s effort was well saved by the ‘keeper, but he could only hold out for so long and when Suarez planted a corner on the head of Steven Gerrard, Anfield was sent into raptures a the Liverpool skipper opened the scoring.

Blues striker Romelu Lukaku was injured by teammate Gareth Barry in the buildup to the goal and the big Belgian was replaced by Steven Naismith as the visitors looked to strike back — first through a Phil Jagielka effort that was knocked away by Simon Mignolet and then Kevin Mirallas whistled a low effort just wide of the post from 20-yards. Nerves were starting to jangle until the Reds hit on the counter-attack for their second, and then third, of the night.

Daniel Sturridge raced clear of fullback John Stones to latch onto a perfectly metered Philippe Coutinho through-ball to finish coolly past Howard to make it two, and before Everton could find their feet, Kolo Toure lofted a pass over a square backline for Sturridge. The striker has a serious contender for goal of the year; after dashing easily through the Everton backline, the 24-year old let the ball take a bounce before lobbing the on-rushing Howard for his second of the night.

Mignolet did well to block a shot from Leon Osman — introduced for Steven Pienaar at the break — as the visitors tried to find a life-line early in the second half, but it would be be Liverpool extending their lead rather than Everton cutting it as Suarez robbed Jagielka on the halfway line before making a mad dash across the remaining half of the field to slot past the American.

With Everton well and truly reeling, it should have been five on more than one occasion, but Sturridge sent a penalty blasting into the Kop after Howard pulled down Raheem Sterling and the 24-year old, looking for his hat-trick, failed to pick out Philippe Coutinho after a clever passage of play saw the striker try to do it all by himself rather than pass to the Brazilian for an easy finish.

Martinez threw new signing Aiden McGeady into proceedings with just under 15 minutes left to play, but the damage was well and truly done. Three points tonight not only opens up a four point gap on our closest rivals — and closest chasers — but gives Reds boss Brendan Rodgers his first win in the Merseyside Derby; something he’ll well and truly savour as much as the supporters will.

What’d you think about that one? Serious spanking handed out. Tell us about your favorite moments in the comments, or hit us up on that social media thing.