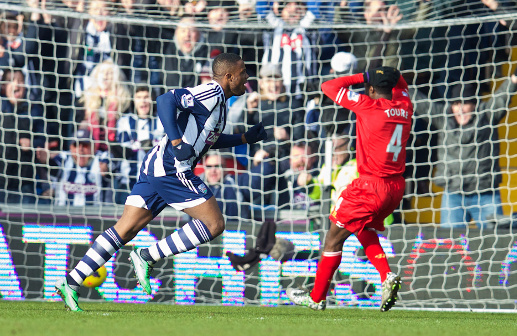 At the bottom of the table, every point counts and Baggies boss Pepe Mel will be more than satisfied with a result that staves off fears of relegation for another week. The top of the table is a different story altogether though and his counterpart in Brendan Rodgers will be rueing the lost opportunity to open a serious gap on the Reds closest chasers after his side failed to build on their demolition of Everton midweek. If we’re going to be completely honest, he’ll be rueing his patchwork defence and decidedly embarrassing lack of activity in the transfer market as well.

Everything looked to be going to plan when Daniel Sturridge opened the scoring in the 24th minute; the visitors, having dispatched their oldest rivals 4-0 on Tuesday in what was a pulsating Merseyside Derby, were cruising in the opening exchanges with the boys in Red enjoying the run of the pitch.

Good work from Raheem Sterling gave the youngster the opportunity to ease the ball onto Luis Suarez on the overlap in the box and the Uruguayan was able to catch the Baggies defence flat-footed with a simple cross that Daniel Sturridge easily stabbed past Ben Foster. You didn’t expect any less from a duo that has so far combined for 37 Premier League goals this season alone and more looked to be on the way for Liverpool, but Sterling’s spin-and-shoot effort deflected out for a corner that Kolo Toure could only shoot directly at Foster in the resulting scramble — the first of a hat full of mistakes from the Ivorian.

Although Brendan Rodgers side looked dominate, they failed to spark the way they did against Everton, and slowly but surely, the Baggies found their way back into proceedings by disrupting the visitors passing game and squeezing the two man midfield of Jordan Henderson and Steven Gerrard. Their dogged persistence began to pay off after the break when Youssouf Mulumbu found space to whip in a cross that Chris Brunt connected superbly with, only to have Jon Flanagan match the Northern Irishman with an even better block. Gareth McAuley saw his arrowed header saved from Simon Mignolet from the resulting corner as Pepe Mel’s side enjoyed a sustained bit of pressure.

Where Liverpool looked to be cruising at the break, they were now very much under-siege until Luis Suarez shrugged off compatriot Diego Lugano to surge in on Foster, and with a two goal lead all but assured, the Uruguayan was only able to shoot directly at the former Manchester United man. If the let-off from Suarez’s tame effort didn’t shock quite enough, Toure playing a tame, square ball across the face of the Liverpool goal did the trick. The Ivorian was looking for Martin Skrtel, but under no pressure whatsoever, he found Baggies substitute Victor Anichebe at the edge of the box instead, and the former Everton man made no mistake with a low finish just beyond the reach of a diving Mignolet.

Joe Allen, on for a fading Philippe Coutinho, was the next Reds player to give Foster a tame testing as the Reds lazily looked for the g0-ahead. An ugly cross-field pass from the West Brom defence looked to compete directly with Toure’s howler, but Sterling’s ball for the on-rushing Sturridge amounted to little with the Baggie’s ‘keeper off his line to tackle up before the 24-year old could really threaten.

Liverpool produced the obligatory late flurry, but it really was too little, too late at that point. I hate to look for negatives, but Kolo Toure took great strides to prove why he remains Brendan Rodgers fourth choice center back and Rodgers, through inaction, showed why the acquisition of someone in the transfer window was so important with a lack of depth on the bench a telling factor in the result. A decent attacking substitution could have very well changed the game when it was starting to peter out — guess we’ll have to wait until the summer for the boss to be afforded that luxury.

Now, excuse me while I try to turn my frown upside down by generously mixing chemicals with an impromptu replay of Tuesday’s win.