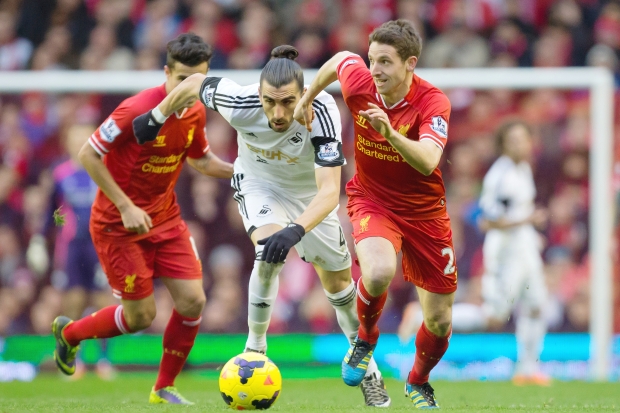 The Northern Irishman, who is quite often criticized for not making any substitutions, let alone the right ones at the right time, made an astute tactical shift with the score tied up. Although Sterling was doing his best to track back, Rodgers recognized that Swansea City was having the run of the midfield, with the duo of Steven Gerrard and Jordan Henderson failing to adequately cope with the amount of bodies the visitors were committing forward. The introduction of the Welshman, who put in an almost perfect cameo appearance, was the perfect adjustment to stem the tide.

Although he was only on the field for a little over a half hour, Joe Allen made his presence known. The introduction of the 23-year old allowed Jordan Henderson to remain in a more advanced role and gave Steven Gerrard, once again playing in a more withdrawn role, license to join the attack if need be by tucking in front of the defense when the Captain ventured forward.

The Welshman won an impressive 88% of his duels — including 5 out of 6 attempted tackles and 100% of his take-ons without committing a foul. The Reds were the first team this season to edge out the Swans in the possession stakes, holding the ball 53% of the time when it was all said and done, and Allen played a key-role in that by completing 95% of his passes, with a 16m average pass length, and making 1 interception.

Although both Gerrard and Henderson were on the field for longer and created more going forward, neither matches Allen’s impact at the back. The Captain won only 44% of his duels – including 50% of his tackles and a poor 1 out of his 4 attempted headers. Henderson also won 44% of his duels, going 2 for 5 in attempted tackles and 0 for 1 in headed duels, giving away 1 foul in the process. 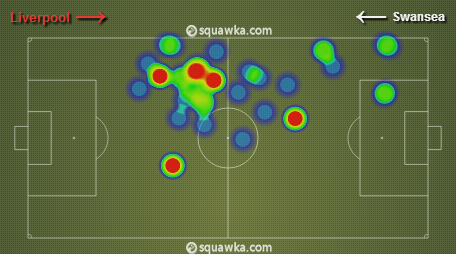 All stats, and this lovely heat map, courtesy of the good folks at Squawka

“The manager congratulated us because three points is three points. At this stage of the season, it’s vitally important, especially with the results over the weekend” Allen told the official website. “People talk about not playing your best but taking the three points. We certainly did that.”

Consistency is the key at this point in the season; although they look well placed to qualify for the Champions League for the first time since 2009, this isn’t the time to let standards slip. With Tottenham Hotspur, Liverpool’s closest chaser for fourth place, losing out to Norwich City on Sunday, a six point gap has emerged between the two sides – something that wouldn’t have happened had the Anfield outfit not taken full points against Swansea City.

“When you play a day later than your rivals, you sometimes feel the pressure of that situation,” continued the Welsh midfielder. “But we were as confident as ever that we could get the result and bridge the gap.” Although the race for the final Champions League spot may be decided when Spurs visit Anfield at the end of March, there are still lots of time for both teams to slip up in the interim. Dropping points to Swansea City certainly would have been seen as a set-back for the Reds, but they were able to pull the result back. For the time being, Rodgers isn’t giving his counterpart in Tottenham manager Tim Sherwood any room for error – and bringing on Joe Allen on Sunday to help take control of the midfield – helped him avoid one of his own.

Over to you, Tim.

Think Joe Allen played a big role on Sunday? Or do you still not get what he does? Have a go in the comments and let us know what you think.