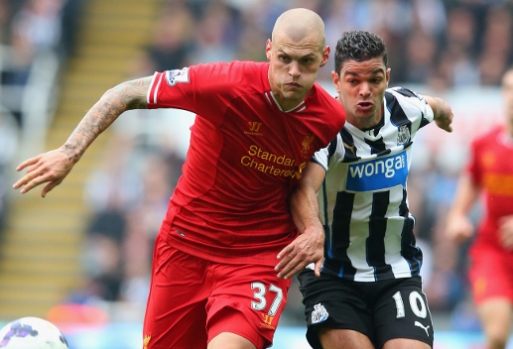 Heading into the final match of the season, it’s hard not to feel both elated and subsequently let down at the same time. With Manchester City brushing past Aston Villa yesterday, Liverpool have been knocked off the top of the table with the Citizens setting up what’s sure to be a dramatic final day of the season.

It all seems a bit potty to be complaining about not having the crown wrapped up quite yet when we weren’t even supposed to be part of the picture anyway, but it’s hard not to think of what could be. While the Anfield faithful spend the day biting their fingernails until they bleed, there’ll be a bit of a different vibe coming out of the Newcastle United end with the Tyneside club putting in a surprising season of their own — one that some sections of their support would have has been surprisingly bad. Having a look at the numbers, you can see why… 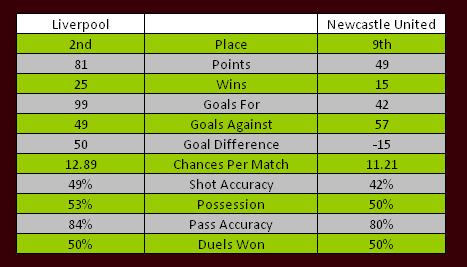 With a mere 15 wins on the books, Newcastle boss Alan Pardew hasn’t had the greatest season. Last weekend’s 3-0 win over newly relegated Cardiff City snapped a 6-match losing streak that saw the Tyneside club lose out to the likes of Stoke City and Swansea; not exactly what you want to see as the campaign is drawing to a close.

In contrast, Liverpool’s 25 wins have kept them in the title picture all year long as Brendan Rodgers moves the side from strength to strength. After coming off an 11-match winning streak, they’ve looked a bit bumpy with the 2-0 loss at the hands of Chelsea and Monday’s 3-3 draw with Crystal Palace upsetting the balance.

For the massive gap in points between these two sides, what’s staggering is that the Magpies have conceded only 8 goals more than the Reds; the 2-2 draw back in October highlighted their defensive frailties and not much has improved since then as Monday’s meeting to Selhurst Park will attest. The -15 goal difference doesn’t bode well for Pardew, but if he plays his cards right, he could make up some ground there on Sunday.

You wouldn’t think one of these ‘keepers played for a team that qualified for the Champions League and the other for a team struggling to stay in the top half of the table. With 10 clean sheets for each of them and and Average Goals Conceded separated by a finger-nail thin margin, Simon Mignolet and Tim Krul are hard to separate on paper. Obviously that begs the question of whether Liverpool’s defence is really that bad or if Krul is really that good…

After looking like a prime candidate for the Anfield exit door, Martin Skrtel has turned things around and is enjoying one of his best seasons in the famous red shirt. Although the defence has been shaky throughout the campaign, the Slovakian has pitched in not only at the back, but in front of net as well with 7 goals to his name this season — though his 4 defensive errors haven’t exactly helped poor Simon Mignolet out.

Fabricio Coloccini, in contrast, hasn’t been effective in the same kind of way that Skrtel has. The Argentine has struggled a bit at the back this season with only 50% of his duels won compared to his counterparts 59% and his contribution to the attack has been null and a void without a single goal or assist over the 26 matches he’s played. To be fair though, his 1 defensive error sure does look better than what the Slovakian has on offer.

Jordan Henderson is likely to make his return to the Liverpool starting eleven after sitting out 3 matches for the straight red card he picked up in the dying moments of the Reds 3-2 win over Manchester City a few weeks back. The former Sunderland man isn’t likely to garner any love from the Tyneside faithful with his Sunderland past swinging their bias way off to the negative.

While Henderson has enjoyed a rather fruitful season on Merseyside, his counterpart in Moussa Sissoko has put in a good shift on Tyneside, edging or in the very least pushing the Liverpool man in every category. A higher Shot Accuracy, more Chances Created and stronger at the back, the Frenchman is turning heads for all the right reasons.

I always say this, but it’s unfair to compare Luis Suarez to almost anyone else in the Premier League. After capturing the PFA and FWA Player of the Year gongs, the Uruguayan followed it up by claiming the Players’ Player of the Year at Liverpool’s awards dinner earlier in the week.

With 31-goals and counting to his name, Loic Remy’s 14, which is a decent return for the Frenchman, looks a bit paltry in comparison. Scroll down the list and the Frenchman’s 3-assists and 30-chances created hardly holds a candle to the Uruguayan’s 12 and 80 — numbers which are almost certain to grow come Sunday.