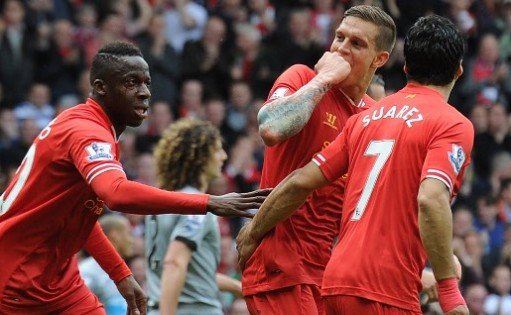 It’s hard to be too upset; goals from Daniel Agger and Daniel Sturridge cancelled out an unfortunate first-half own goal from Martin Skrtel as Liverpool fought back to beat Newcastle United 2-1 in the final match of the season, but with West Ham United failing to upset Manchester City at home, the Reds came up just short in the race for the Premier League title.

Early goals from Samir Nasri and Vincent Kompany ensured that the Hammer’s weren’t about to spoil the party at the Etihad Stadium as the Citizens cruised to their second triumph in three years and Liverpool — who surrendered their fate to the hands of Manuel Pellegrini’s side after the 2-0 loss to Chelsea — finished runners-up for the first time since 2009.

Again, it’s hard to complain too loudly; you only witness so many miracles in your life and yesterday’s just wasn’t on. Despite the immense atmosphere and feelings of expectation in the build-up to the match, when Skrtel sliced in Yoan Gouffran’s cross, it was pretty obvious that this wasn’t going to be our day. Poor in the pass, weak in possession and generally looking ready for a bit of a break, the Reds hardly looked the kind of side that were barnstorming the top of the table. This was the team that we expected to finish fifth back in August — there was little sight of the one that finished second until after the break.

With Philippe Coutinho introduced for Joe Allen early in the second half, it was two goals in two minutes and we looked dangerous again. A pair of Steven Gerrard freekicks from just outside the area provided the ammunition for both with first Daniel Agger smashing home a difficult volley at the far post before Daniel Sturridge prodded home from close range.

Newcastle striker Shola Ameobi — playing what was likely his last match for the Tyneside club — wasn’t impressed with referee Phil Dowd’s decision making skills and picked up two yellow cards in quick succession as he argued his case. If under-fire Magpies boss Alan Pardew wasn’t aggrieved enough to surrender the lead on the last day of the season, he’d feel even harder done by when substitute Paul Dummett was shown a straight red for a rash challenge from behind on Luis Suarez as the striker broke free from the half-way line.

Although Newcastle were reduced to nine-men, Liverpool failed to punish them further. By this time everyone in the the stadium was well aware of what was going on at the Etihad, but as Brendan Rodgers name echoed around Anfield, it hardly mattered. Returning to the Champions League was job number one and that was already completed quite some time ago. Challenging for the title? Well, that was just a welcome surprise, and though it still stings to miss out, there’s many more seasons like this just over the horizon — and that’s not the same “next year is ours” claim that you hear at the end of every season. This one is for real; you can see us coming up the hill, boys.

Thanks to everyone for a fantastic season. I hope you enjoyed it as much as I did. Look for the obligatory Season Review in the coming days…