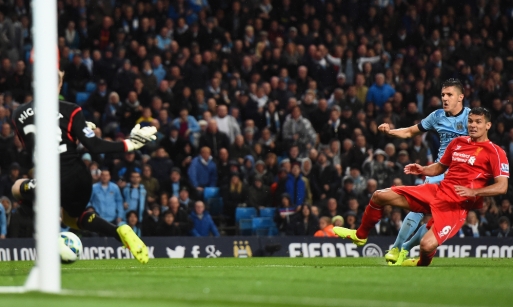 Although neither side quite hit the beautiful heights over the 90-minutes that we witness from these two last season, Manchester City showed why their being pipped to retain their title with a comprehensive victory over Liverpool as new signing Mario Balotelli watched from the stands.

Brendan Rodgers side took the game to the defending champions, but it a familiar defensive slip saw the hosts take the lead through Stevan Jovetic just before the break. The Montenegrin striker was on hand to finish a flowing move before Sergio Aguero put the icing on the cake, finishing past Reds ‘keeper Simon Mignolet immediately after entering the fray. Rickie Lambert forced Pablo Zabaletta into an own-goal after heading an inch perfect Daniel Sturridge cross on net, but it was little consolation as they slipped to their first defeat the season.

The lazy pundit will point to Luis Suarez’s departure to Barcelona last month to explain Liverpool’s once razor sharp attack looking a bit too blunt, but that hardly gives credit to City’s well drilled defense. While the Reds enjoyed the run of play for much of the first half, their attacks tended to peter out as they were patiently marshaled by Manuel Pellegrini’s men.

Alberto Moreno was enjoying some space down the left as he showed the travelling Kop how much he loved to get forward, but the Spaniard was culpable for City’s opener when Dejan Lovren headed the ball into his path in the area expecting him to send it clear. It goes without saying that’s not quite how it played out for the 22-year old — certainly more used to the slower pace of La Liga — as he got caught on his heels and was caught swinging at the ball. Jovetic, quick to pounce, latched onto the loose ball and it was a simple finish past Mignolet from there.

If going into the break a goal down was concerning, Rodgers worries would be doubled when the Montenegrin snatched a second ten minutes after the restart. He was the scourge of the Reds during pre-season and he kept that trend alive by both starting finishing a flowing move that evoked visions of the defending champions in their swaggering prime.

Lazar Markovic, making his league bow for his new side, made an immediate impact as he hooked up with Sturridge — who was nothing short of unlucky throughout — but Vincent Kompany was on hand to keep the Citizens comfortable.

Aguero was brought on to replace the ineffectual Edin Dzeko with just over twenty minutes to play and the Argentine put the match beyond a shadow of a doubt when he ran onto fellow substitute Jesus Navas’s through-ball to beat Mignolet from a tight angle.

Emre Can and Rickie Lambert were introduced as time ticked down and the former Southampton man was able to gather his new side a slice of pride when, after Sturridge did well to hold onto possession, the 32-year old forced Zabaletta into an own goal after the Argentine initially kept his strong header out of the net and denied him his first senior goal in the famous red shirt.

Not matter what heights we hit last season, beating Manchester City at the Etihad Stadium is a big ask for any side — especially one in transition like Liverpool. While the scoreline hardly tells the whole story, it’s one that we’ll do well to forget quickly. We’ve got a whole season ahead of us, and I don’t know about you, but I saw some promising play from both the new boys and the old ones.

And then, of course, there’s the ones I’d rather not mention until the transfer window is closed. Regardless, the sky, it would seem, is still securely in place.