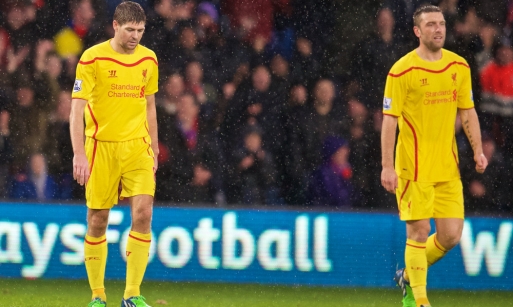 It’s a comedy of errors, but no one, bar the rest of the league, is laughing as Liverpool continue their winless streak with a gutless performance against Premier League basement dwellers Crystal Palace.

Well, they were in the basement, anyway. The Eagles weathered an early storm to pull level through Dwight Gayle after Rickie Lambert scored his first goal for the Reds within the opening two minutes. The poor decision making of the visitors will be one of the main talking points to come out of the second half as a pair of blunders handed Palace two goals in four minutes to all but seal the win. Three points for Neil Warnock’s side bumps the Croydon club to within touching distance of 12th place where the the Reds, whose problems continue the multiply, currently rest their heads.

After failing to recover from a groin injury picked up while training with Italy, Liverpool were without whipping boy Mario Balotelli — a favorite scapegoat for manager and pundit alike — to lead the line, though the 24-year olds absence didn’t look to be a bother when Adam Lallana’s perfectly struck cross-field pass found Rickie Lambert, making only his second start for the team he supported as a boy, drifting in behind former Reds fullback Martin Kelly. The touch to take the ball down, the balance to steady himself and the finish past Palace ‘keeper Julián Speroni all amounted to highlight reel material, but no one could have predicted that shot would be the only one the visitors would register on target for the remainder of the match.

From then on out, we were that poor.

If Lambert’s opener came as a surprise to the traveling Kop, Palace’s equalizer was the opposite of that. With Joe Allen off getting treatment on a head wound, the hosts hit us on the break to great effect, passing past a static Steven Gerrard and catching Dejan Lovren and Martin Skrtel — both out of position — retreating towards their own. Yannick Bolasie’s powerful, low shot was unlucky not to beat Simon Mignolet as it cannoned back off the post, but luck had little to do with Dwight Gayle losing the Slovakian as the preceding chaos unfolded, and he was on hand to bundle home the rebound and restore parity.

Though I don’t believe it was for a lack of wanting — not, so much, the bare minimum of actually trying — a response never came as we were treated to the retelling of the same old story. Lot’s of possession, but nothing done with it; toothless in attack, unassured at the back, soft, chewy and utterly lacking in creativity in the middle. Following the final whistle, Liverpool boss Brendan Rodgers took full responsibility for the result today, and considering how Palace found the go ahead, I’m not sure if that makes the Northern Irishman extremely brave or utterly clueless.

To be fair, the Reds actually looked the more likely to take the lead as the 80th minute approached, but Simon Mignolet’s goal kick flew directly out of play. Under no pressure or prompting whatsoever, a professional footballer hit the ball out of play from a dead-ball situation. Fast forward less than half a minute and Palace had taken the lead after the entire backline decided re-organizing themselves wasn’t a priority. Bolasie, once again the catalyst, wheeled with ease past Lovren before centering for Joe Ledley to sweep home.

Not to be outdone by his Croatian counterpart, two minutes later, Skrtel, already on a yellow card, decided that a needless foul on Gayle at the edge of the area was the best course of action.

Argue the merits of a tactical foul all you like, but when Palace skipper Mile Jedinak curled home the resulting free-kick, Reds reserve ‘keeper Brad Jones, a player better known for his spectacularly sculpted hair than his playing ability, actually decided to go to sleep right there in the Liverpool dugout. He may have been trying to emulate the rest of the Reds defence — bar Javier Manquillo — in order to find his way into the squad, I’m not too sure, but after I sat through the Reds tepid attempt at a response, I followed suit and shut my eyes for a little bit.

I’d love to put a positive spin on it and say that this newest of the new low points will be the launching pad we’ll use to re-ignite our season, but I just can’t see it happening. In the buildup to the match, Rodgers talked about changing things up to re-discover that winning formula — and though we saw a bit of that today, much of it was down to either injuries to other players or desperation.

Lambert for Balotelli in the starting eleven was a no-brainer considering the Italian was injured, but what else did we get? Alberto Moreno being resigned to the bench so Glen Johnson could be played out of position, Emre Can replacing Joe Allen — who put in a shift — in the second half instead of an off the pace Steven Gerrard and Borini brought on for Lallana to little effect.

While it’s a bit too early in the season to write it off completely, it’s obvious that the changes Rodgers talked about will need to amount of much more than token gestures towards his own lip service. There’s little doubt that he’s under real pressure now, and should the midweek meeting with PFC Ludogrets knock us out of the Champions League, I shudder to think what the repercussions will be.