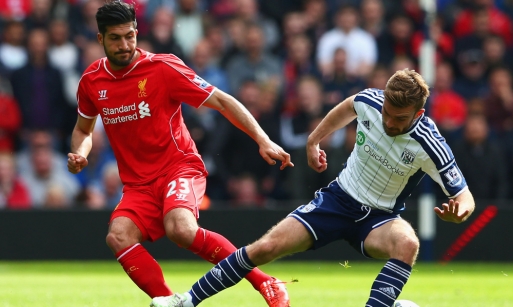 German midfield man Emre Can was one of the few signings that Liverpool brought in last summer that has been met with almost universal appreciation. Handed only cameo appearances in the middle of the park to start the season before cementing his place as a ball-playing center-back in Brendan Rodgers stuttering defence, the 21-year old didn’t always impress during his first season at Anfield, but he did show glimpses of the kind of player he’s going to grow into.

That type of player, according to the ex-Bayern Munich man, is one that wins trophies. “I did not go to Liverpool just to play football,” explained Can in a recent interview with the website of the German national team. “I want to win titles there, and first I want to win something with the U21s here. My experience with Liverpool has been very good, and the youth work they do in England is very good—the English U21 side is a really good team, and favourites, so hopefully we won’t have to play against them.”

The midfield powerhouse, who is expected to play a big role for the Germany in the upcoming u21 European Championship, has also been tipped to be a major player for Brendan Rodgers Liverpool next season, though just where he’ll be playing is up for debate. With club legend Steven Gerrard moving to Major League Soccer, there’ll be a substantial hole to fill in the midfield during the coming campaign, but Can isn’t considering that just yet. Instead, like any good player, he’s focused on the task at hand.

“We are very well prepared for the other teams,” continued the 21-year old, sounding very much like the stereotypically prepared German. “We’re ahead of the game, have watched a lot of video, and know the character of the other teams well.”

One thought on “Emre Can Came to Liverpool to Win Trophies”