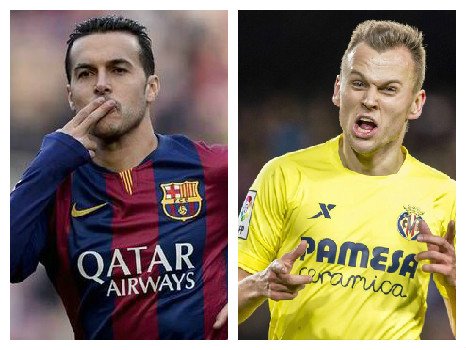 As tensions between want-away winger Raheem Sterling and Liverpool continues to escalate, the Reds are believed to be weighing up potential replacements for the 20-year old with Barcelona forward Pedro and Real Madrid attacker Denis Cheryshev said to top their short-list.

With Manchester City expected to come back with a third bid in the ballpark of the £50mil that Liverpool value the former Queens Park Rangers man at, CEO Ian Ayre could be flush with cash before the club depart on their tour of Australia, Malaysia and Finland. While the timing of that throws up a logistical problem or two with pre-season preparations paramount to players being integrated into both the squad and the manager’s philosophy, that large stack of cash means that the Reds will be able to compete financially for a top replacement.

Pedro, who only just signed a new contract with the Catalan treble winners, has been on the outs at the Camp Nou for a number of years now with a lack of playing time getting his goat. Rumoured to be available for somewhere around £15mil, the 27-year old would be a dynamite replacement for Sterling with the Spaniard representing the finished article as opposed to the youngsters oodles of promise. That being said, should he be made available, the Anfield outfit will have competition for his signature with Arsenal, who would be able to offer Champions League football, also thought to be interested.

The big money signing of Roberto Firmino from Hoffenheim last month has shown that Liverpool are ready to invest in their squad this summer, but Pedro may be a bridge too far without top class European football on offer — so, with that being said, let’s rehash their reported interest in Los Blancos winger Cheryshev, shall we? The Russian impressed during a season long loan with Villarreal, but has returned to the Santiago Bernabéu with an uncertain future in front of him. While he’s spoke at length about his willingness to hook-up with the Yellow Submarine on a permanent basis, his rumoured £15mil asking price may be a bit too much for them to come up with. Another loan is always a possibility, but Liverpool could be tempted to move for the 24-year old with his age and availability jiving better with their usual transfer policy.