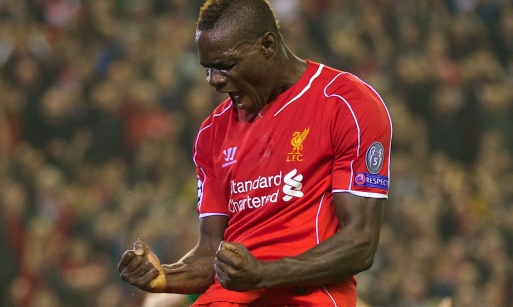 Rickie Lambert isn’t the only Liverpool striker headed for the exit door this summer with Reds outcast Mario Balotelli also looking likely to leave after failing to deliver the goods at Anfield last season. The definition of a panic buy, the Italian arrived from AC Milan near the end of August for £16mil and promptly began a campaign of frustrating underachievement as the Reds slumped to a sixth place finish.

While the 24-year old does have his defenders, there’s no question that his output hasn’t even come close to justifying either his transfer fee or his reported £90k per week wages. Left off of Liverpool’s summer tour on compassionate grounds after the death of his father, Balotelli has been a ghost around Melwood, training with new arrivals Christian Benteke and Roberto Firminio as the new season edges closer.

Although there’s been interest from a number of Italian sides, there’s hasn’t been any official approaches as of yet despite some very public interest in the Liverpool hit-man. “I would take him, he would be highly motivated here,” Bologna sporting director Pantaleo Corvino was quoted as saying. “Of course, Bologna have to respect certain financial parameters, but for the right price I would even look at the possibility of buying him outright.”

It appears everyone is looking for a discount. While the Reds will reportedly entertain taking a loss of a up to £9mil on the Italian, that’s not quite good enough. Sampdoria president and known eccentric Massimo Ferrero has been running his mouth about the 24-year old for months now, but he’s yet to put some money where his mouth is and only just recently had another moan about how much Balotelli would cost him. “Balotelli costs €10m,” he said before playing the poor card, “but with a discount we await him with open arms.”

Does he want a coupon or something?

10 thoughts on “Italian Sides All Talk, No Action on Mario Balotelli”