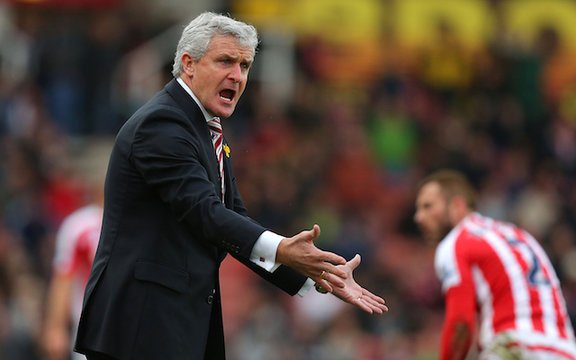 Liverpool return to Premier League action on Sunday with a trip to exactly where they finished their last campaign in spectacularly disastrous fashion back in May. The words “Stoke City” and “rampant” don’t get seen together a lot, but the Potters were even more on their game than the Reds were off it as they handed their visitors their worst defeat in over 50-years.

While revenge has been at the top of Liverpool’s to do list since the final whistle was blown, Stoke boss Mark Hughes will have an entirely different looking agenda to work with come kick-off as his re-vamped side look to better last season’s ninth place finish and hopefully push their way into a European spot. Getting off to a quick start can have a lasting impact on a a gruelling campaign, but the Welshman will have a few selection concerns going into the meeting with the Reds — including dealing with the news that’ll start the season without his captain and defensive mainstay Ryan Shawcross who is set to have surgery on his back.

“We’ve been managing the injury for a while now and it’s been fine doing that but it’s got a point when Ryan wasn’t comfortable with it,” he said before the news was revealed that the 27-year old will be out for around eight weeks. “We are at that point now when we have to weigh up whether we can manage it through a long, hard Premier League season or do we address it now and get him back quickly,” continued the Stoke manager before moving on to concerns surrounding defender Marc Wilson and forward Marko Arnautovic.

“Marc went over on his ankle a couple of weeks back and just did the same thing towards the end of the game,” explained Hughes following the 3-0 defeat to Portuguese side FC Porto in their final pre-season friendly. “Marko has had this ongoing thing with his thigh for a number of weeks and he thought he felt something but we got him back in the dressing room and he’s got good power in it,” he said before adding, “But we are hopeful that those two won’t be too significant.”

While the Welshman could very well be without that trio when Liverpool come to town, it’s not all doom and gloom around the Brittania quite yet with Bojan Krkic, who has been out for the last six months, making his long awaited return to action. Hughes has stressed repeatedly that the former Barcelona man won’t be rushed back to action, but the 24-year old seems to have other ideas and could play some part against the Reds.

“I feel really good, and every day I feel more power and confidence. I am coming back at the right time. I worked really hard for that and I’m in a good point in my recovery. This week I’m working hard every so I can be involved in the first game feeling 100 per cent,” he told the club’s official website, before admitting that although their results were disappointing, building fitness is the important part ahead of the season. “In pre-season we’ve been in different places for three weeks – in Singapore, a training camp in France and in Germany) and the most important thing for everyone is fitness. I know results are important, and when you play any game you try to win, but everyone will focus this week on the first league match of the season,” he continued before adding, “I think the team is ready. I think the players are ready and I’m happy I started one game. I played 65 minutes and I feel good.”

After trading sunny Catalonia for Staffordshire last summer, Krkic has found himself in increasingly familiar company over the last couple of months with former Barcelona men Ibrahim Affelay and Moha El Ouriachi joining the young Spaniard and Marc Muniesa, another ex-Blaugranes, at Stoke. While the Potters are looking decidedly more cosmopolitan these days, they’ll still have their work cut out for them come the weekend with Liverpool adding a few new faces of their own — something ‘keeper Shay Given knows all too well.

“No one will need reminding of what happened in their last game and that they are representing Liverpool, a huge club and they have to prove it was a one-off,” he said ahead of Sunday’s clash. “But we’ve got our own team talk and Christian is a big signing for them. We’ve got to try to keep him quiet. He’s got the lot really and if he gets the right service I think he will have a big season. His goal last weekend against Swindon, that chest and volleyed, showed to people that he’s not just someone who can head home crosses,” explained the veteran ‘keeper. “He’s got some good quality with his feet as well and he’ll be a big one for us to keep quiet on Sunday.”

Which, of course, isn’t what we want to see at all. I said in my season preview that every match is worth three points, but on the back of our humiliating end to our last campaign, getting off to a good start is of the utmost importance. A win on Sunday isn’t going to erase the terrible memories of what happened last season, but it’ll be a step in the right direction. I don’t even want to see what the backlash will be like if we come up short, but I’m sure Hughes would be interested to find out…