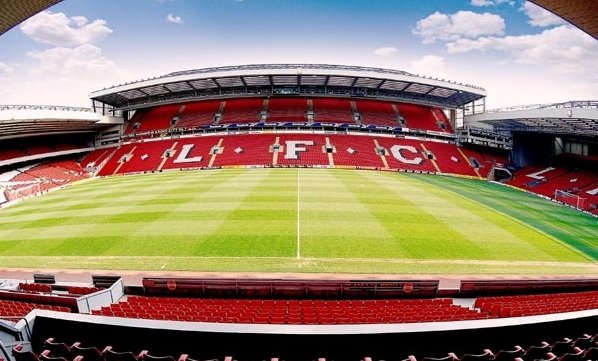 Liverpool’s redevelopment of the Main Stand has been rolling along smoothly with the club’s official website doing a good job of keeping supporters around the world updated on the progress being made. With the expansion expected to be completed in time for the start of next season, the Reds have since submitted a new planning application that will deal mostly with the area connecting the renovated area and Stanley Park.

As a supplement to the original approval granted back in the Fall of 2014, Liverpool owners Fenway Sports Group are looking to significantly increase the soft landscaped area around the Main Stand which will include a new grassed area that, according to the club, “can be enjoyed by fans and the local community, particularly on non-matchdays.” Other additions would see the colour scheme of the stadium simplified to reflect the Anfiled’s traditional architecture and new flooring materials that will incorporate coloured scarves that will direct fans to the main entrances of the stand.

Earlier in the month Reds CEO Ian Ayre discussed the ongoing work and how it would benefit the club on a day to day basis with the financial rewards of increasing the capacity of the stadium set to help us keep pace with our Premier League rivals. The extra 8,500 seats, of which half will be reserved for the corporate market and and the other half opened to general sale, will take the capacity of the stadium to 54,000.

“Work is progressing well and despite the fact that this is a complex project, we are on track in terms of budget and schedule. We still expect that the new Main Stand will be open to fans and hospitality guests at the start of the 2016-17 season, which will be an impressive accomplishment by everyone in Liverpool who has worked on the project. John, Tom and I are grateful for their efforts,” FSG president Mike Gordon told the official website late last month. “The spaces in the new stand have been designed to create a much warmer feel than you would usually find in a typical football stadium. We are pleased with how it is coming together, and believe that when we are finished, our supporters and everyone connected to the club will feel the same way.”