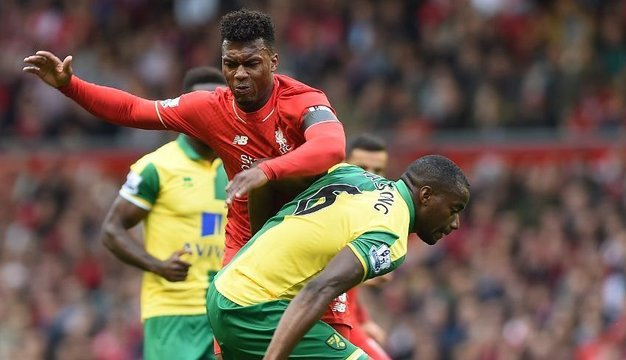 Even with Daniel Sturridge back in the starting eleven and Liverpool looking quite a bit better than they have all season, the pressure remains squarely on Reds boss Brendan Rodgers after Norwich City came from behind to spoil the party and grab a share of the points in a tense Anfield afternoon.

The England striker, making his first appearance since having hip surgery in May, featured up top with summer signing Christian Benteke and the hosts looked all the better for it, but it was Danny Ings, brought on for the big Belgian at the break, that found the breakthrough less than three-minutes after the restart. This Liverpool side can’t have nice things though and a poor punch from Simon Mignolet following a Robbie Brady corner saw the ball fall invitingly for Russell Martin and the Canaries captain was only too happy to level the scores.

There was promise in the first half as Liverpool pressed the newly promoted visitors; Nathaniel Clyne went close with a daisy cutter, Norwich ‘keeper John Ruddy was on point to deny a swirling effort from Sturridge, Philippe Coutinho could only shoot wide after finding himself in space while James Milner’s volley from the edge of the box was lacking the necessary power to beat the England man. At the other end of the pitch Cameron Jerome, well marshalled by the backline of Emre Can, Martin Skrtel and Mamadou Sakho during the opening exchanges, came close to breaking the deadlock right before the stroke of halftime only to have Mignolet palm his confusing shot/cross away from danger.

It was all a bit better from the Reds with the invention and industry of Sturridge dovetailing well with the work-rate and physicality of Benteke, but the 25-year old was withdrawn at the break with concerns over his hamstring taking precedence over any further involvement. Ings, who has made three cameo appearances for the Anfield outfit since moving from Burnley FC in the summer, was quick to stake his claim for an expanded role after coming on for the Belgian. Alberto Moreno, excellent throughout, was laying in wait when Lucas won the ball high up the field and the Spaniard dinked a first time pass through to the speedy striker slid a measured shot under Ruddy before running off to celebrate.

With the floodgates seemingly opened, Liverpool pressed hard for a second and almost had it when Coutinho clipped a shot just over the bar, but that final ball, that bit of skill just wasn’t on and they’d be left to rue their misfortune when a seemingly innocuous corner was bumbled by Mignolet and Martin finished with a hit that any striker would be proud to call their own.

Sturridge was replaced by Adam Lallana and Lucas was withdrawn in favour of Roberto Firmino as the hosts searched for the equalizer, but it was Alex Neil’s side that almost pinched the lead when Sakho, getting tangled up near the half-way line, allowed the visitors to break down the left. Exposed at the back, it was a heart in mouth moment that thankfully ended with Mignolet atoning for his earlier gaffe by denying Matt Jarvis at the near post. Back up the other end of the pitch, good eyes from Firmino sent Coutinho off on a flier, but he’d see his compatriot denied when face to face with Ruddy as the Brazilian was seemingly caught in two minds.

A collective groan from the Kop and you can say that was that; the expected flurry at the end coming to nothing as Liverpool laboured to impress and Rodgers, once again staring down the prospect of explaining just why his team remains without a win since the middle of August, looking worse for wear. What we saw was without question better with the penetration that’s been lacking from our game returning in fits and spurts, but a battling point against a newly promoted side at Anfield would never, ever be enough to relieve any of the pressure that’s currently weighing the Northern Irishman down. If we hadn’t already put up with a full season of this mediocrity, you could chalk it up as one of those days and move on, but those days piled up to weeks, and then to months and now we’re rounding out to a full year — yes, there were obvious improvements, but they’ve been too slow coming. At this stage of the season, we don’t have time to get better incrementally and we shouldn’t have to considering how long we’ve been waiting…