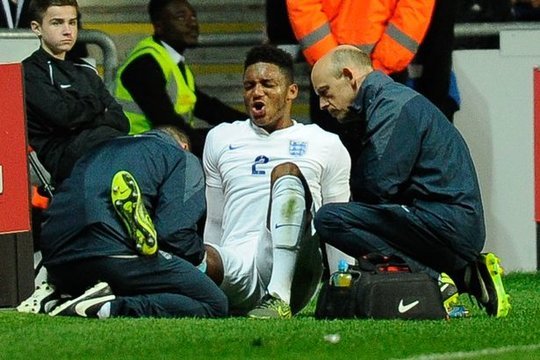 Although England U-21 manager Gareth Southgate initially played down the knee injury that Liverpool defender Joe Gomez picked up in the 3-0 win over their counterparts from Kazakhstan in Coventry’s Ricoh Arena yesterday, the former Middlesbrough boss was quite a bit off the mark with the 18-year old expected to miss the rest of the season with an anterior cruciate ligament injury.

Gomez, who arrived from Championship club Charlton Athletic for an initial fee of £3.5mill during a busy summer for the Reds, has impressed during his short spell on Merseyside, keeping the far more recognized Alberto Moreno out of the side as he operated out of position as a full-back. While the Spaniard has since won his place back, the youngster looked like he was going to play a key role in the domestic cups as well as the Europa League throughout the campaign — something that obviously won’t be the case anymore.

New Liverpool boss Jurgen Klopp, who is reportedly a known admirer of Gomez with his Borussia Dortmund side monitoring his progress in the second tier, won’t be happy about that at all. The club has yet to comment on the news, but various media outlets are reporting that he’ll spend between six to nine months on the treatment table — effectively ending his season right here, right now. Even if he were to somehow miraculously shave some time off of that recovery period, there’s little chance that he’d fit in time to play for the Reds during the current campaign.

England, who maintained their 100% record in qualifying for the U-21 European Championship in 2017 with their win over Kazakhstan, will also feel the pinch with the former Charlton man expected to be handed an expanded role under Southgate — but, really, who cares about them?