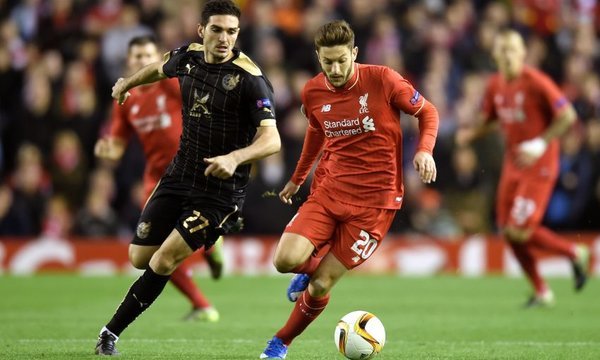 It was another Thursday in Europe and another draw for Liverpool as the Reds came back to draw with 10-man Rubin Kazan in new boss Jurgen Klopp’s home bow as principal owner John Henry and chairman Tom Werner watched on from the stands.

After a sprightly start, the all too familiar failings cropped up for the Anfield outfit as their visitors took an early lead through Marko Devic’s well taken effort; brushing off the attentions of Nathniel Clyne, he put the finishing touches on Blagoy Georgiev’s pin-point diagonal ball just 15-minutes into the match. That lead wouldn’t last for long though; already in the referee’s book for a foul on Alberto Moreno, Oleg Kuzmin was given his marching orders ten minutes from the break for hauling down the impressive Emre Can on one of his many surging runs forward. Before the defender was even down the tunnel, Divock Origi was heading Philippe Coutinho’s free-kick across the face for goal for the unmarked German to sweep home.

With parity restored and over an entire half left to play with a man advantage, you’d expect Liverpool to go on and win it handily, but they’d obviously forgot the plot.

Before the final whistle, we’d see the return of Christian Benteke as he replaced Coutinho just past the hour mark, as well as Roberto Firmino with Divock Origi making way for the Brazilian for the final 15-minutes, but even the introduction of the Reds’s big money summer signings couldn’t find a way through a resolute — and, let’s just say altogther lucky — Tartars back-line.

Relatively content to allow their hosts to keep the ball in areas where they’d do well to threaten and take pot-shots from distance, Valeriy Chaly’s side played the containment game for the whole of the second half and somehow got away with it. Relentless pressure as the Reds fought for every ball high up the pitch gave way to little. Set-pieces of all different varieties as corners were kicked long, short, near post and far post, failed to provide a breakthrough. Coutinho fizzled more than one shot wide, Can came close to doubling his tally on a few occasions and Benteke saw a fine effort bounce off the foot of the post — this was a match that was just crying out for a recognized, clinical striker.

The Belgian, on his day, can be just that, but returning from over three-weeks out with a hamstring problem, the rust was evident in both him and Firmino. Klopp doesn’t like to talk about players that aren’t available, but when the final whistle was blown, you’d have to wonder what the 48-year old would have gave to have the likes of Daniel Sturridge, or, even Danny Ings, up top tonight. It sure would of been nice to win.

You won’t catch me trotting out the well worn, cynical “meet the new boss…” or “He’s not the Messiah…” clichés. This Liverpool team was always going to be a project for the German; he’s a very good, very talented manager, but he’s not a going to repave L4 overnight. They can say we’re without a win under Klopp just as easily as I can say we’re unbeaten. Pundits who’ve won next to nothing or haven’t had anything resembling a successful spell behind the bench can make snide comments about the Reds “winning the running”, and I can say it’s nice to see them get their legs moving again. Never, ever underestimate the benefits that motivation and positivity can bring to both a team and their fan base. Remind me when the last time was that you heard the Kop sing You’ll Never Walk Alone at full-time just as fervently as they did at kick-off?

It’s going to take time; you’re sick of hearing it and I’m sick of saying it, but first impressions last a lifetime and Klopp has made a helluva good one. He, and more importantly his side, look like they’re going to be worth the wait. The storm’s still swirling and it will be for a while yet, but this forcaster is predicating we’re going to come through it. Golden sky — remember that?