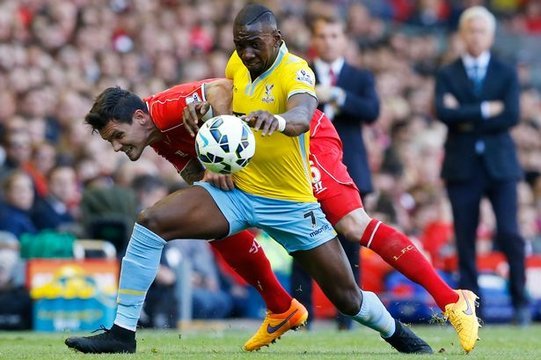 Forget all the contenders for the top spots in the Premier League, if there’s one team that Liverpool should dread facing it’s Crystal Palace. Crystal Palace is sponsored by the Mansion Group – a global online gambling business that owns a few online casinos, including the Australian site – Mansion Casino. The Eagles have a tremendous record against the Reds and they’ll be looking to add another notch in the win column when they visit Anfield on Sunday.

Impressive throughout their scoreless draw with Manchester United at the weekend, Palace really should have snatched all three-points; Yohan Cabaye missed a glorious opportunity to break the deadlock while defensive duo Damien Delaney and Scott Dann both had chances to put the hosts ahead as their visitors created little, but Yannick Bolasie, who Reds supporters around the world are well acquainted with, spurned their best chance to grab the go ahead goal when he hit the crossbar during the frantic opening minutes.

Speaking to Palace’s official website following the final whistle, Bolasie hailed his side’s performance and Selhurst Park, saying that if they’re able to keep that momentum going that they’ll cause teams a lot of “trouble”. Joking that Liverpool were his “favorite” side, reminiscing on his impressive performances against the Reds in the past, the 26-year old cheekily reminded the Anfield outfit that he’d be making the trip to Merseyside at the weekend. Despite winning quite handily on this ground last season, the Frenchman wasn’t about to take anything for granted, emphasizing what a “tough” game, it would be, but stopping short of playing down his side’s chances.

The pundits were all saying that Liverpool’s trip to Stamford Bridge last weekend was going to be new boss Jurgen Klopp’s biggest test since he moved to Merseyside last month, but after he masterminded a convincing 3-1 win over the Blues, that prediction might have been a bit short sighted. Unlike Chelsea, who have been struggling badly as of late, Crystal Palace, did the double over the Reds last season, are in form and should cause the German manager a serious headache — and considering our past experiences with Bolasie, there’s a good chance the French wide-man will be one of the main causes.