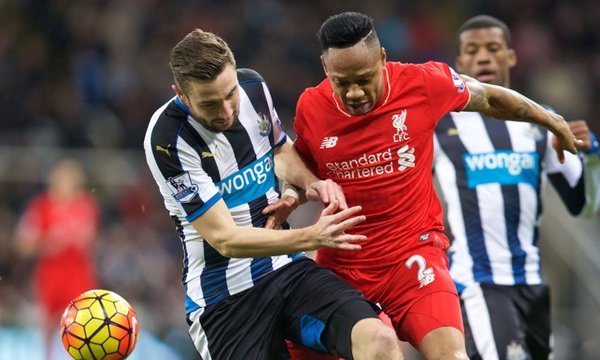 When you consider Newcastle United were coming off a drubbing at the hands of Crystal Palace and the fact that Liverpool bagged six unanswered goals on Thursday, there looked to be only one result when the Reds visited St. James Park yesterday, but what we got wasn’t at all what was expected.

It’s time to recite another round of the “no easy games” mantra; looking sluggish and disconnected, the visitors looked in dire need of some rest. With a forward line that was increasingly isolated, Jurgen Klopp’s side were unable to put the same kind of strangle-hold they had on Southampton on their hosts and they were punished in kind when Martin Skrtel deflected Georginio Wijnaldum’s shot past Simon Mignolet to break the deadlock with 20-minutes left to play. Daniel Sturridge, introduced into the fray just past the hour mark, would squander a good chance and Alberto Moreno’s angled finish would be incorrectly denied by the offside flag, but it wouldn’t matter in the least as Wijnaldum added a second in injury time to seal three much needed points for the Magpies.

“It’s a really big result because we’ve had a few poor weeks. We reacted well today. We played as a team,” the Dutchman told BBC Sport following the final whistle. “Sometimes you need luck to score a goal. The first bit of luck was the ball staying at my feet. After that I shoot. He touched it – I still think it’s my goal because I’ve shot on goal,” he explained, hoping to add another goal to an already impressive tally. “It’s always important and good if you win games because it will give you confidence. We must know we won’t win games easily. We must fight like we did today.”

Still very much mired in the relegation battle, Steve McLaren’s side will be able to take heart from a win that very few would have predicted. Giving up eight goals in only their last two matches, Newcastle didn’t exactly look like a side capable of stopping Klopp’s relentlessly rampaging side, but if ever there was an indicator that there’s far more work to be done at Anfield than a jubilant Kop is prepared to admit, their display on Sunday should be enough evidence to temper expectations.

With both Sturridge, who scored a first-half brace at Saint Mary’s, and Divock Origi, who bagged a hat-trick, on the bench, the Reds attack looked flat as Christian Benteke, Jordon Ibe and Roberto Firmino failed to trouble a Magpies defence that has been less than impressive as of late. Emre Can, who was suspended after picking up his fifth yellow card of the season, was missed with the aggression and industry the 21-year old brings to the mix unable to be replicated by Joe Allen despite the Welshman putting in a decent shift.

“I think we deserved a point maybe but not more because we didn’t play well enough. I like to play the dirty points too – it’s no problem. If Alberto’s goal was given it was 1-1 then the game can change. Until then we didn’t play as well as we like to,” mused Klopp in his post match interview. “I have to watch the game again. We were not really in the game,” conceded the Reds boss. “We were not aggressive enough or close enough. There were good moments for pressing but we didn’t do it.”

The manager might have to say that we deserved a point, but it looks like we got exactly what we deserved — nothing at all. That’s football and this is a side that is in transition; the quality needed to play the way Klopp wants to play and be effective at it isn’t there in every position quite yet. We’re still able to be exciting and dynamic one day and a lethargic shell of a side that can barely string two passes together the next. With the festive period just over the horizon, the fixture congestion isn’t going to abate anytime soon and while talk of a title challenge is sure to be curbed following Sunday’s loss, we’ll see if we’re still talking about finishing in the top four after that. It’s a long, hard road ahead…