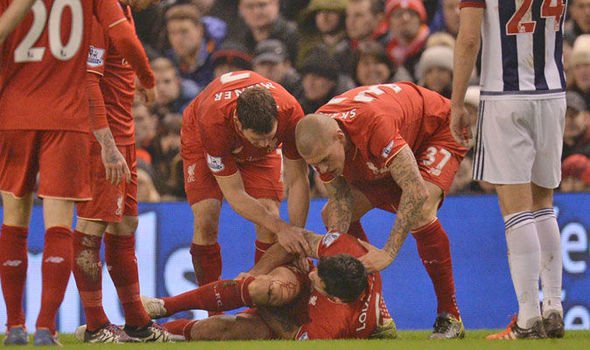 Liverpool are hoping that the injury that defender Dejan Lovren picked up in the closing stages of the draw with West Bromwich Albion isn’t quite as bad as it looked with cup commitments and the busy festive fixture period just over the horizon.

A late challenge from Craig Gardner saw the Croatian defender stretchered off the pitch with a horrible looking gash after catching the Baggies midfielder’s studs square on his knee. With just over 10-minutes left to play and trailing by a goal, Reds boss Jurgen Klopp forgo a like-for-like replacement and introduced Belgian striker Divock Origi into the fray. While the youngster’s deflected strike late in injury time would salvage a draw for the hosts, Lovren’s absence will be a major concern in the days to come.

“We don’t know too much about it. It’s a cut, as everybody could see in the dressing room,” said the Liverpool manager in his post match press conference. “We hope it’s not too serious, but we have to wait for the scan. We have to wait overnight to see if it becomes swollen or not. I spoke to him and he felt not too bad. I saw the situation and anything could happen in that situation,” he conceded. “Hopefully we’ll have a little bit more luck than in previous situations like this – but we have to wait.”

Although the Reds should be able to welcome Mamadou Sakho back to the fold next week after the Frenchman made it through his first full training session since suffering a knee injury against Crystal Palace five weeks ago, the Anfield outfit remain light at the back with Joe Gomez out for the season and Jon Flanagan still not ready to return to action. While an injury to Lovren last season wouldn’t have been such a big deal, after turning his form around under Klopp to the point that he was nominated for November’s Player of the Month award, the Croatian would be missed if he were to spend a significant spell on the sidelines.

More on this when we get word…