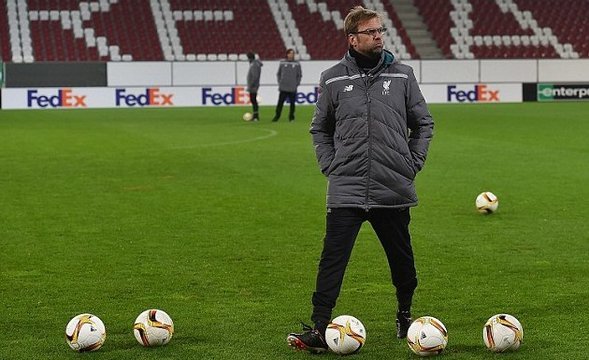 With Liverpool’s domestic form keeping them on the peripheries of the race for a top four spot, ahead of the first leg of the Reds Round of 32 meeting with German club FC Augsburg, boss Jurgen Klopp has admitted that securing a spot in the Champions may be best achieved through winning the Europa League.

“We don’t have to say ‘We have no chance’, but if you look at the teams in the competition now it is like a little Champions League. There are a lot of high quality teams in it. Sometimes you can look at winning a cup as the shortest way to get somewhere,” said the German manager ahead of the meeting with Augsburg later today. “For sure the Europa League is not the shortest way to get to the Champions League, it is a really hard race,” he conceded. “The chance to qualify for the Champions League makes it more interesting, ask Sevilla who would have qualified many times with this rule.”

The Anfield outfit have found respite from their domestic struggles in the cup competitions this season despite exiting the FA Cup at the hands of West Ham United last week, they have a League Cup final meeting with Manchester City on the cards at the end of the month and they remain firm favourties to navigate the tie with Augsburg.

“What can I say, we are in the last 32. We can see the line. But I cannot say now, ‘This is our only chance of being in the Champions League’. It’s a chance,” mused Klopp, refusing to rule out a late season surge to the top of the pack. “How many points in the league are we away from the Champions League? Nine. So, yeah, at this moment I would say we have a better chance this way at the moment,” he continued. “Maybe the top four clubs will have a crisis. But we have to solve our own problems. We have to be at the highest motivation for the game without thinking about the last moment and knowing the possibility.”