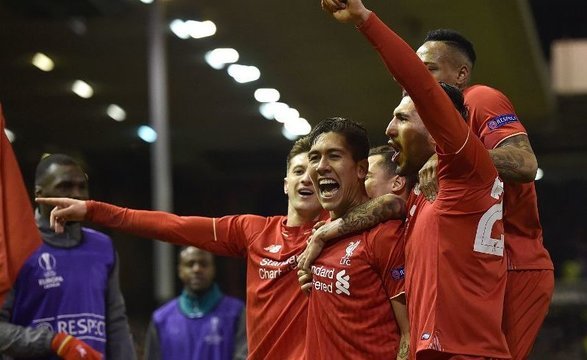 Liverpool put one foot in the quarter-finals of the Europa League with a commanding performance at Anfield that sees them head in to the return leg at Old Trafford with a two goal cushion.

It would have been a hard call to make in the moment, but the Reds were on the receiving end of another controversial decision when Memphis Depay hauled down Nathaniel Clyne as the fullback rushed onto the end of a cheeky Philippe Coutinho pass. Replays suggest that he got it spot on and Daniel Sturridge did the same as he dispatched the resulting penalty, putting the ball just out of the reach of a diving David de Gea. The Spaniard was on hand to keep the visitors in this tie with a number of clutch saves as the hosts looked to run up the scoreline, but he was powerless to keep out the second when Roberto Firmino finished coolly after chaos in the Red Devils box gave Adam Lallana a chance to tee-up the in-form Brazilian.

As far as results go, it’s one that you’d take all day, everyday — and the fact that it comes against our bitter rivals just makes it that much sweeter.

“The fans were brilliant, electric,” said Liverpool captain Jordan Henderson, speaking with the press immediately after the final whistle. “That gave us a great boost,” enthused the skipper, though he was loath to see a number of good chances go begging. “De Gea made some good saves,” conceded Henderson, before adding, “We created a lot of chances and we felt we could be two or three up.”

That’s no joke either. United may have come close to shocking Anfield with an early strike when Depay’s cross evaded Alberto Moreno to find an unprepared Marcus Rashford within the opening 30-seconds, but chances for Louis van Gaal’s side were virtually non-existent as Simon Mignolet enjoyed a quiet evening between the sticks. The Reds absolutely bossed this one, and though the Dutchman’s counterpart in Jurgen Klopp will be the happier manager, the German’s thoughts are likely to follow the same lines as those of his captain with wasted opportunities — Coutinho’s shocker coming to the forefront of my mind — having the very real potential of coming back to haunt them in one weeks time.

For now though, that’s neither here nor there; unable to cope with the pressure, United were overrun time and time again as the Reds got their pressing game spot on. Defending from the front through the likes of Lallana and Firmino kept Anthony Martial isolated, composure in the middle from Henderson and Emre Can made Marouane Fellaini and Morgan Schneiderlin redundant and neither Rashford or Depay could have any impact from the flanks as they were controlled at every turn by Clyne and Alberto Moreno.

Absolutely brilliant from the Red men and utterly shambolic from that team from up the road — exactly the way I like it. Inconsistency over the past few months is starting to be replaced by coherency and hegemony on the pitch, but I don’t want to talk about that. There’s still a second leg to come so there’s no reason to get lippy, but we just stuffed the Mancs. Does anything else really matter?