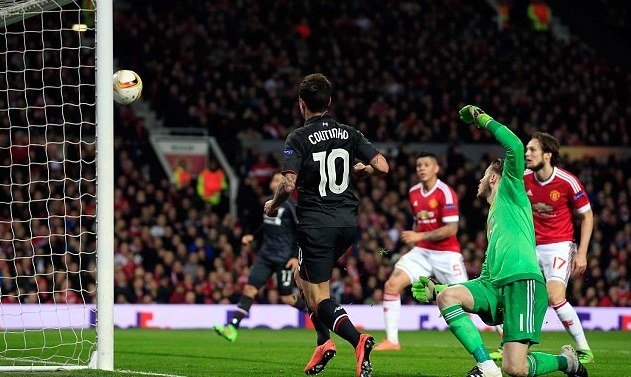 A pair of goals courtesy of Daniel Sturridge and Roberto Firmino in the first leg gave Liverpool a commanding lead when they visited Old Trafford for the return match of their Europa League Round of 16 showdown with Manchester United, but Philippe Coutinho put the icing on the cake on Thursday night when he cancelled out Anthony Martial’s earlier penalty with a cheeky chip over Reds Devil’s ‘keeper David de Gea.

“I had the chance to be face to face with De Gea and I’ve tried this kind of thing before in training, so I thought ‘why not?’,” the Brazilian told UEFA’s official website. “Luckily, it came off,” he said, knowing full well his audacious attempt could have been a total disaster. “You could say that this was one of my best goals in a Liverpool shirt, but once again, all that counts is the team, and this evening the team performed at a very high level, creating several chances and showing how strong we are.”

Coutinho, who had never scored against their Northwest rivals, was visibly moved after dinking the ball home just before the stroke of half-time. Dominant over both legs, the Reds not only earned a spot in the quarter-finals of the Europa League, but they got one over on United in what was the first meetings between the two arch-enemies in a competitive European competition.

“Our morale is really high due to the 10 games without losing [in the Europa League] and this success against Manchester United, after a good game at home last week,” he continued, full of pride. “We are building confidence to achieve big things for the club.”