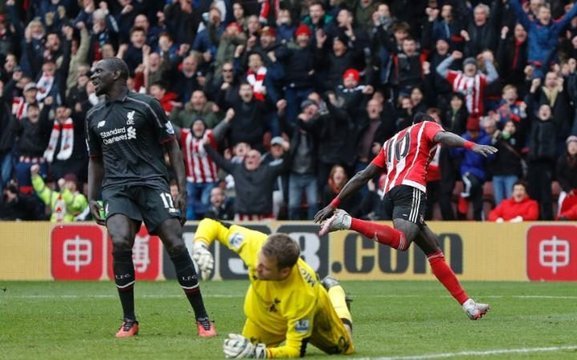 Beautiful, commanding, flowing football on one side of the interval and dismal, plodding, uncertain football on the other — it’s a cliche as old as time, but this really is a game of two halves.

Looking certain to follow up their 6-1 hammering of Southampton back in December with another dominant display, Liverpool raced out of the gates and bagged two goals in a five minute spell with Philippe Coutinho lashing in from distance and Daniel Sturridge’s clever finish rewarding Divock Origi’s intelligent build-up play. How the Reds headed into the break leading by only two is a mystery in itself, but what really boggles the mind is how they came out for the the second half and proceeded to throw it all away.

You have to give credit where it’s due — trying to hang on to at least a shred of dignity, Saints boss Ronald Koeman introduced Victor Wanyama and Sadio Mane to the fray and it worked a treat. Looking likely to pick up a second booking and lucky to have not given up a penalty in the first half for clattering Shane Long, Dejan Lovren was withdrawn in place of Martin Skrtel and the veteran defender’s first real contribution was to pull Graziano Pelle to the ground, giving referee Roger East no choice but to point to the spot.

If the visitors exploits in the first half hadn’t made it obvious that it wasn’t Southampton’s day, Simon Mignolet keeping out Mane’s well struck penalty would have confirmed it had the Senegalese attacker not quickly atoned for the miss, losing the attentions of Mamadou Sakho en route to finishing coolly past the Belgian ‘keeper.

Seemingly unable to complete a pass or hang on to the ball for any length of time, the Reds midfield continually put their defence under increasing pressure as the minutes ticked on and it was only a matter of time before Pelle restored parity with a curling effort from the edge of the area — a finish that Christian Benteke, who had a chance to restore Liverpool’s two goal lead not long before, would do well to take note of after the Belgian rolled his low shot wide with Fraser Forster already beaten.

The two big punches had the visitors staggering, but they’d be well and truly knocked-out when Mane added his second, securing his Man of the Match award after latching on to Pelle’s through-ball before finding the net with relative ease to send Saint Mary’s into delirium.

Maybe our games in hand will prove to be the ultimate decider, but our chances of securing any sort of European football for next season looks to be in tatters. Obviously, there’s a handful of positives to take from this with Sturridge showing some of that old skill in front of the net and our growing skill hitting on the counter-attacking chief among them, but those are a topics for another time — right now, Klopp will be more concerned with his side going to pieces when it shouldn’t have been all too hard to hold it together.