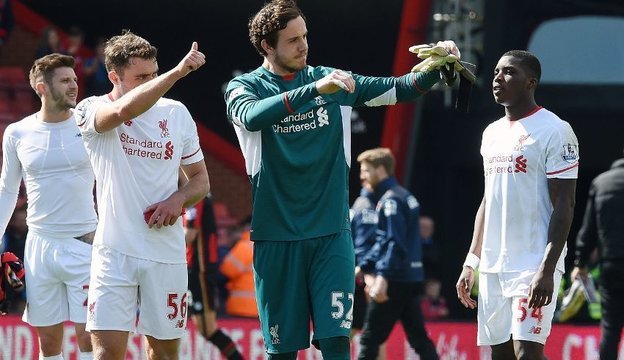 With six matches left to play and a Europa League semi-final meeting with Spanish side Villareal just over the horizon, Liverpool boss Jurgen Klopp may be walking a tight-rope, but the German boss has shown yet again that he’s able to get the balance just right as his much changed side eased to a 2-1 victory over AFC Bournemouth.

Having made seven changes in last weekends thumping of Stoke City at Anfield after bagging a 1-1 draw with Borussia Dortmund midweek, the charismatic manager took things even further this time. A dramatic 4-3 victory over the Bundesliga side in the second leg on Thursday was a high-intensity, all action bit of football and Klopp responded in kind by making ten changes to the starting eleven with only Roberto Firmino keeping his place — and, unsurprisingly, the Brazilian was the first on the score-sheet.

Cherries ‘keeper Artur Boruc did well to keep Daniel Sturridge’s audacious backheel out of the net after the England man collected Jordon Ibe’s cross in the box, but the Polish shot-stopper could do nothing to keep out Firmino’s follow-up as the 24-year old pounced on the rebound to add to his growing goal tally.

It looked like Liverpool would head in to the break with a slender advantage, but Sturridge was constantly looking to make up for some of the missed opportunities from earlier in the half and he’d do just that as the clock ticked on into stoppage time as he again took advantage of a Ibe’s excellent delivery, rising highest to head past a helpless Boruc.

If their hosts were poor in the first half, they were much improved after the break though they lacked the decisiveness to make their visitors pay the price. Debutante ‘keeper Danny Ward, who was given the nod in place of Simon Mignolet, followed up a rock solid first half display by twice denying Joshua King and getting his fingertips to Lewis Grabban’s header, but the former would make things tense late in stoppage time when his powerful effort flew past the youngster — though there’d be no time for Eddie Howe’s side to build on that momentum.

“The goal came too late for us,” conceded the Bournemouth boss. “We felt in the second half had we got that goal earlier it would have made an interesting end to the game,” he explained, realistic about the result. “We were missing that spark, especially in the first half,” he continued. “You have to give Liverpool credit.”

And, in turn, you have to give the Cherries the same. Although their Premier League status isn’t secured quite yet, in 13th place and looking far better than their spot in the table might suggest, this is a side far too good to be playing in the Championship next season. With that being said, three points is three points and if you’ve been stopping by Paisley Gates for a while now, you’ll know that I don’t care how we get it or who it’s against. All that matters is that we win…

While there’s little doubt that Klopp will rotate again when we host Everton midweek in what’s sure to be a pulsating Merseyside derby, it was encouraging to see him able to balance a whole host of fringe players and eek out what ended up being a rather comfortable victory. Another domineering performance from Joe Allen and a steady display from Kevin Stewart in the middle of the park, a return to the side for Ibe and Ojo coupled with goals for Sturridge and Firmino — things are looking up for the boys in red.