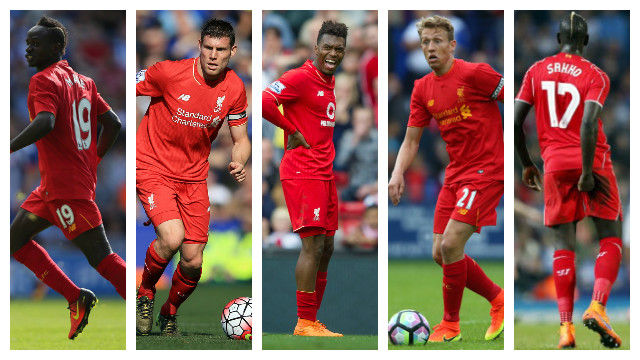 After being sent to the hospital for scans following a training ground collision, Liverpool attacker Sadio Mane is doubtful for Saturday’s trip to newly promoted Burnley FC, though Reds boss Jurgen Klopp played down any any concern over a long term spell on the sidelines after early reports indicated that he may have dislocated his shoulder.

“It was a situation, a challenge between two players up in the air, coming down and then Sadio fell on his shoulder but it’s not that serious,” the German manager told reporters in his pre-match press conference. “In this moment, I have no idea if he could be available for the weekend or not, but I don’t think it will take a long time. It would have been better without this situation, but things like this will always happen and you cannot avoid this,” he added, before playing down the seriousness of the injury. “In the first moment it was not too good, but meanwhile I think it is all OK.”

The Senegalese attacker opened his account for Liverpool with a superb solo goal as the Reds won at Arsenal on opening day, and though he’ll be missed at Turf Moor, Klopp went on to reveal that we shouldn’t be lacking in firepower with Daniel Sturridge back in full training and potentially set for a recall to the starting eleven. Along the with 26-year old, vice-captain James Milner has rejoined the group while both Lucas and Mamadou Sakho are inching closer.

“In full training [we have] Millie and Daniel. Lucas is on a good way and made the warm up with us and then we let him do something else. Maybe today he is in team training, we will see,” mused the Liverpool boss. “Mama is in a better way, not part of team training but is not too far away from it, so that’s good,” he continued Klopp, before adding, “My job is to watch through the week who gives me which signs and then I will make the line-up. The last game is one thing I think about, of course – it’s important but not the only thing I should use for my decision.”