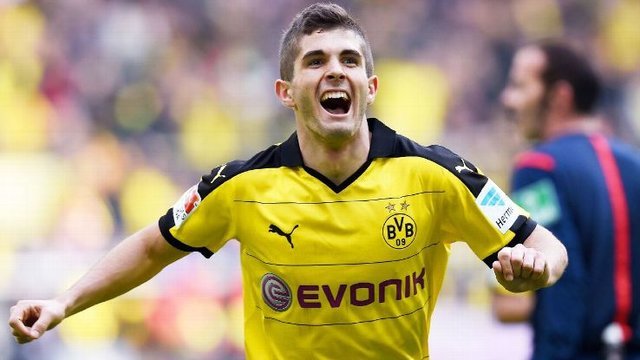 The transfer window may have closed at the beginning of the month, but the rumour mill is still churning as hard as ever with Liverpool’s apparent ongoing interest in Borussia Dortmund winger Christian Pulisic still making headlines. Although the Reds reportedly failed in a bid to bring the United States star to Anfield over the summer, BVB sporting director Michael Zorc has confirmed that the Bundesliga side won’t be offering him a new contract in a bid to ward off interest.

“He has only just turned 18,” Zorc told German media outlet Kicker. “He can be delighted to have made his debut in the Champions League aged 17 and to have set up a goal there as well as having scored and set up goals in the Bundesliga,” added the Dortmund man, going on to confirm that there’s no plans to sweeten his existing deal. “That’s not an issue right now.”

It could very well be an issue in the very near future with Klopp, who was in charge of Dortmund when Pulisic was drafted in, reportedly a big fan of the 18-year old winger. Despite having the likes of Mario Gotze, Ousmane Dembele and young Turk Emre Mor supposedly ahead of him in the depth charts, BVB boss Thomas Tuchel has still found a way to get him in to the side at every possible opportunity, and if his comments from last April are anything to go by, that won’t change anytime soon.

“He’s a teenager in his first year of professional football. His first two games in the starting eleven were in Leverkusen and here today in Schalke – not the easiest of tasks,” said Tuchel, speaking to the press following a hard fought draw with bitter rivals Schalke 04. “It shows our huge appreciation that we see him as a full time player on our team. He was a valuable substitute against Werder Bremen and Liverpool,” added Tuchel, singing the winger’s praises. “He has looked really good recently which has been proved today.”