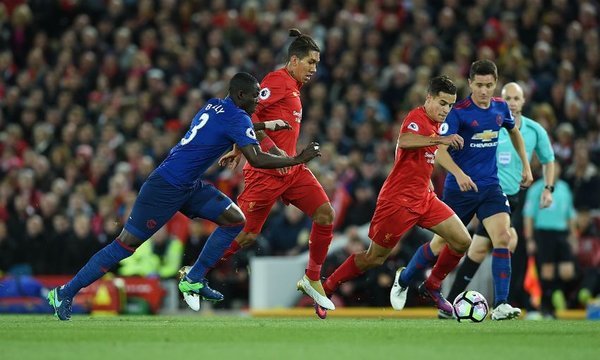 Coming up against a Manchester United side set up to suffocate and frustrate in equal measure, Liverpool found it hard going during the early stages of the goalless draw with their bitter rivals on Monday night. Failing to get their press and pass game going until the second half, the Reds missed out on a chance to go level with league leaders Manchester City, but with a meeting with West Bromwich Albion looming at the weekend, they’re quickly putting the stalemate behind them as they look to keep pace at the top end of the table.

“For sure, we’ve come from a good sequence of victories. We came strong for this game,” Philippe Coutinho told ESPN Brazil. “Unfortunately we didn’t win it, but we’re still in the fight,” added the Brazilian, who saw probably the best chance of the match go begging when his 25-yard pile driver was turned around the post by United ‘keeper David De Gea. “We are two points behind the teams on top, so we need to think of the next game, regain the points and keep it up,”

In a performance flawed by uncharacteristic mistakes and poor passing, the hosts failed to build the kind of momentum and intensity that has seen them power to wins over the likes of Arsenal, Leicester City and Chelsea this season. Vintage defensive organization from United boss Jose Mourinho saw his side snatch a point while surrendering the opportunity to take the other two, but the season is long and the result — had Zlatan Ibrahimovic not made a hash of the one chance afforded to him — could have been much worse.

“The draw wasn’t what we wanted but a point will do for tonight,” said Roberto Firmino, echoing the sentiments of his compatriot. “The first half was very closed and fought, the second half was more open. Our team tried all the ways, we were even better, in my point of view,” continued the Brazilian, closing the book on the draw ahead of the meeting with West Bromwich Albion at the weekend. “Unfortunately, we couldn’t win.”