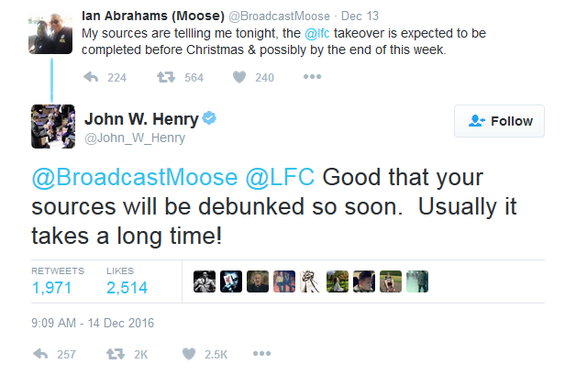 Rumours surrounding Fenway Sports Group’s interest in selling Liverpool ratcheted back up yesterday with talkSPORT reporter Ian Abrahams tweeting that the sale of the club to a Chinese Consortium — believed to be strategic investment firm China Everbright — should be “completed before Christmas & possibly by the end of this week.”

Having constantly denied full stop that they had any intention of listening to offers except those for a small, non-controlling stake in the club from the right kind of investors, principal Reds owner John W. Henry took to social media to put the speculation surrounding a full on buy-out to bed. The American billionaire doesn’t tweet much, but when he does he makes it memorable — and his response to Abrahams, much like the jab he threw Arsenal’s way when they tried to take Luis Suarez to the Emirates, was no exception.

@BroadcastMoose @LFC Good that your sources will be debunked so soon. Usually it takes a long time!

Well, it appears that that is that. When these same rumours did the rounds in August, the club issued a firm response with Chairman Tom Werner telling the Liverpool ECHO he they’ve “said it before and I’d like to say it again: this club is not for sale” and that they “haven’t had a discussion or a negotiation with anyone” because offers for the club “get put in the garbage.” While this might sound like like a smoke and fire situation, we’ve heard it all before. This is about the time you should be getting on with your day — enjoy!