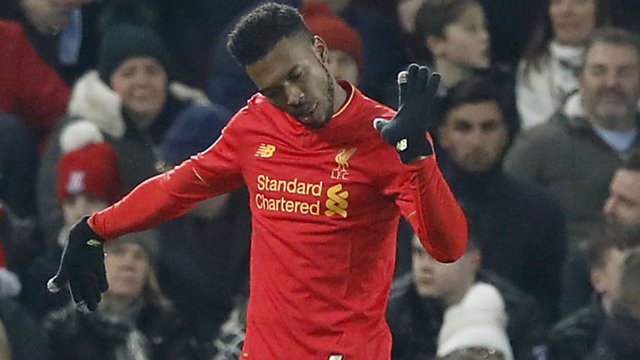 Although Liverpool boss Jurgen Klopp has been insisting for months that Reds striker Daniel Sturridge won’t be leaving the club next month, on the back of his first Premier League goal of the season, the 27-year old has doubled down on his manager’s sentiment and curbed any talk of him being unhappy at Anfield.

“The most important thing is that I keep my mindset as positive as possible,” Sturridge told Sky Sports News after scoring the winner in a resounding 4-1 win over Stoke City yesterday. “It’s a team game at the end of the day. Everyone is going to be needed in the squad. I’ve not had any issues or problems within the camp,” confirmed the Reds hit-man. “I’m enjoying my football and when I get my minutes I focus myself and if I’m not in the team I stay positive and give my input when I can.”

Now, that’s not to say that he wouldn’t like to play more, but whispers of a move away from Merseyside when the transfer window re-opens next month appears to be nothing more than paper talk. Latching on to a poor back-pass from Potters defender Ryan Shawcross, the Reds striker showed some fancy footwork to round Stoke ‘keeper Lee Grant en-route to potting his first of the year. With Sadio Mane set to hook up with Senegal for the Africa Cup of Nations in January, it was the perfect time to start scoring as he could find himself back in the starting eleven in a big way as Klopp looks to cope without the tricky winger.

“In a situation like this, 3-1 up but still intense, you can then use the quality Daniel has,” enthused the German manager, speaking to the press following the final whistle. “In this moment you can learn a lot of things in life but not being in this position in this moment – that’s natural and doing what he did was perfect,” added Klopp. “It was a wonderful goal and very important because it closed the game and gave us the opportunity to cool down a little bit.”