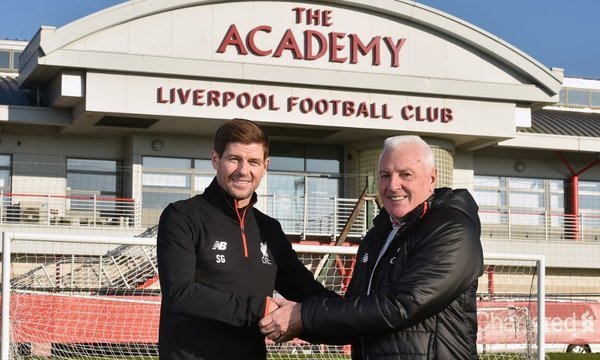 In news that’s set to surprise absolutely no one, Liverpool announced yesterday afternoon that club legend Steven Gerrard has taken up a spot at the Reds academy, stepping in to a wide-ranging role where he’ll be directly involved in the professional development of the youngsters.

“It feels really good. It feels really similar to when I started the journey as a youngster; I’m very happy, very excited and can’t wait to get started,” said the 36-year old, speaking to the club’s official website. “The decision to come back wasn’t based on emotion. I think we’ve all been through enough emotion towards the end of the playing career,” explained Gerrard. “This is a fresh start and the key in deciding to come back was about contributing to the Academy and contributing to the club, rather than making a decision on sentiment or emotion.”

Making just over 700-appearances for Liverpool during a glistering career that saw him lift 10-trophies, that the former Reds skipper has come home to roost after calling time on his playing career is of no surprise. Saying the opportunity came too soon, Gerrard was offered and ultimately turned down the chance to take over at League One strugglers MK Dons with a job at Anfield always looking like his next step. While it’s not easy to see what the future might hold for the Whiston born ex-midfielder, it’s not quite as difficult to see what he can bring to the club in the immediate future.

“I’ve been there and done it on the pitch in terms of the journey, the highs and lows, the emotions… I’ve had some incredible nights being a player for this club and I’ve also had some cruel lows as well,” said the former Reds midfielder, reflecting on his career. “When I was growing up, I always used to try to use players that were playing in the first team, try to bounce things off them and ask them questions,” mused Gerrard. “I’d try to learn off them and watch them very, very closely, so if I can help these players in any kind of those ways it’ll definitely be worthwhile.”