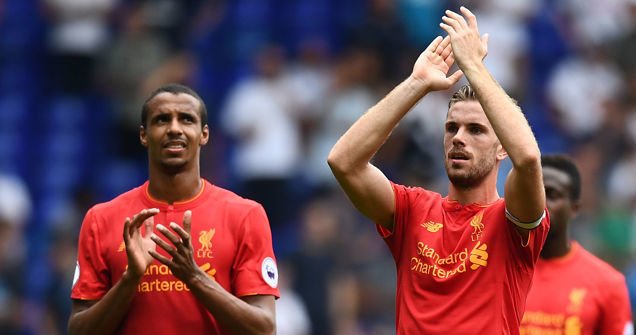 Having climbed back in to the top four with a comfortable win over Arsenal at the weekend, Liverpool go into the meeting with Burnley FC on Sunday knowing that any slip-up could have massive repercussions as they look to not only consolidate their place in a Champions League spot, but rediscover the winning consistency that’s eluded them since the turn of the year.

“You learn a lot in negative moments and I believe that this can make us stronger as a team and as individuals,” said Reds defender Joel Matip, speaking to the club’s official magazine. “We have to try to get back to what we did before. What gave us the strength, we have to find it again. We have to run more than the opponent, work harder than the opponent and do more than the opponent,” explained the Cameroonian, reflecting on their mixed bag of results over the last couple of weeks. “We are all optimistic that if we can do that we can stay back on the winning track.”

The Gunners, who are almost certain to respond after dropping out of Europe at the hands of Bayern Munich on Tuesday, sit a mere two-points behind the Anfield outfit, but hold a crucial game in hand. If the North London club don’t pose enough of a problem, just behind them are Manchester United, who are only a single point behind Arsenal and also hold a game in hand on Liverpool. With the title out of the picture and the club out of the FA Cup, Champions League qualification is really all that’s left for the Reds. Of course, having top tier European football on offer is always a major draw in the transfer market, but for this club, it boils down to so much more than just money.

“I’ve hated Tuesday, Wednesday and Thursday nights this season when other Premier League clubs have had big Euro matches and we’ve had to watch at home on the TV. People have said at times during this season that not playing in Europe is an advantage in the league,” explained Liverpool skipper Jordan Henderson. “Well if it is, it’s an advantage I don’t ever want to have again because we want to qualify each and every season,” stressed the 26-year old ahead of the meeting with Arsenal last weekend. “No-one here needs reminding of how important it is to Liverpool, and for these remaining 12 matches we have to play with that focus of trying to secure European football for the club next season.”