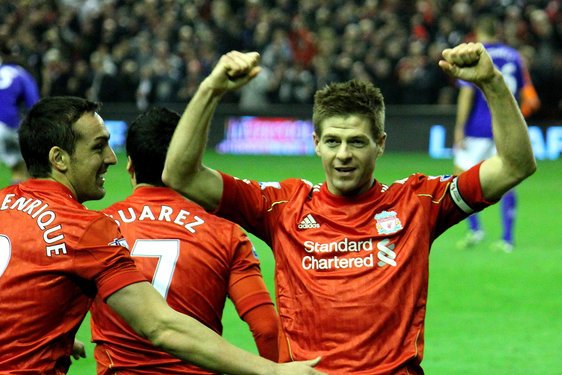 With the forthcoming derby, we look back at some of the most memorable games against our not so noisy neighbours. So in no particular order and with no apologies if I’ve missed your favourite outing against Everton, here are the top five.

The Liverpool derby may not be considered the biggest in football, it’s not even our biggest derby, but there is something special about turning them over at their own place. The game in the late summer of 1985 seems like from a different era when you watch it back now, and the score was notable for a couple of other reasons. First of all, Dalglish was player manager. You just can’t imagine that happening today. Kenny scored with a beautiful curling shot inside half a minute, before Rush doubled the lead 15 minutes later. Shortly before half time, after being set up by Dalglish, Steve McMahon scored his first for the club, spanking a thunderbolt into the bottom corner to make it 3-0 and for all intents and purposes, putting the game to bed. It wasn’t quite to be the case, however. A goal apiece from Sharp and Lineker, combined with some uncharacteristic poor finishing from Rush and Dalglish made it a lot more nerve wracking afternoon than it should have been. Liverpool held on though, to stop a run of three consecutive derby defeats.

There is a reason this game (and the others) are listed and not the 4 -0 victory in Jurgen Klopp’s first derby just shy of a year ago. Last year’s demolition was just as much down to Everton’s inept performance and form as it was to anything else, and though it was great watching men against boys, it can hardly be classed a classic. Three points are the most important thing on the 1st – currently 13/20 at BetStars, but it either needs both sides to turn up and turn it on or for something truly special to happen for it to be talked about years or decades later. And that is exactly what happened just after fireworks night in 1982. A second half hat trick by Ian Rush, adding to one in the first half was one of the best displays by a player in the fixtures history. On the day Rush – the derby’s leading goal scorer with 25 to his name – could have scored half a dozen after unlocking the home side’s offside trap with ease again and again.

5th round of the cup, 8 goals, probably the best derby played anywhere, anytime. It was also to be Dalglish’s last game as manager. No more needs to be said. Especially about the replay.

Quality wise it may pale in comparison with the 8 goal thriller above, but for sheer drama few can rival this from the spring of 2001. After retaking the lead to make it 2-1, Robbie Fowler missed a penalty that would have put the game to bed, but Everton won their own spot kick almost immediately afterwards which was dispatched making it 2-2. A draw wouldn’t have been a disaster but after looking like all 3 points were in the bag, it would have been a bitter pill to swallow, and it would have been the bluenoses going home happier. Then 3 minutes into injury time up steps Gary McAllister. Cue delirium. Every time I watch this goal the free kick gets further and further back. I swear before too long he’ll be taking it from in the centre circle.

Back when the FA cup and the final in particular was one of the best days of the sporting calendar, this was one of not just the best derbies ever played, but one of the best cup finals. The game between the two best teams in the country lived up to its hype, and both sets of players produced an absolute classic. Jan Molby’s display that day, particular in the second half, should be studied as part of the national curriculum. A brilliant day, a brilliant game and no better way to secure the club’s first double.