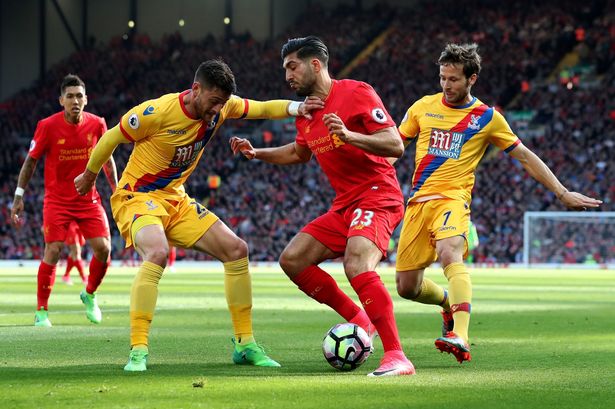 Coming off a disappointing loss to Crystal Palace at the weekend, Liverpool supporters around the world will be keeping an even closer eye on the Manchester Derby on Wednesday when City and United — the Reds two closest chasers in the race for Champions League football next season — square off. With qualification out of their hands for the time being, all the Anfield outfit can do is trying to win their remaining matches and hope to stay ahead of the curve.

“Four wins has to be the target. The next game is Watford and we want to win there and we will see what happens,” said Liverpool midfielder Emre Can. “Everyone is very disappointed because we should have won against Palace. We had the chances. It was stupid from us. Again it was a set piece. We had worked on them in training, we had trained very well,” lamented the German. “All the set pieces in training we had done very well but again we concede a goal after a set piece. It was stupid.”

Having seen their title charge falter following a terrible string of results following the turn of the year, Liverpool looked to have got their campaign back on track until their seven match unbeaten streak came to an abrupt halt on Sunday. Philippe Coutinho put the hosts ahead with a stunning free-kick, but former Reds striker Christian Benteke bagged a brace to silence a packed Anfield. Despite dominating possession, the Reds looked out of ideas and sorely missing the likes of Adam Lallana, Sadio Mane and Daniel Sturridge — something of a familiar story.

“When you look at the bench it was very young,” explained Can, with the likes of Ben Woodburn and Joe Gomez propping up the Reds substitutes list. “We miss a lot of our players, there are a lot of injuries. You should look at Chelsea. They are lucky with that, for example,” added the midfielder. We don’t have luck with this – but it is no excuse. We have to go again. We have to fight for our target.”