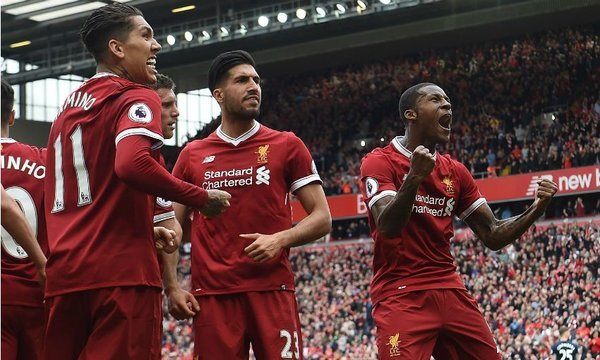 It’s not the title and it’s not a trophy, but it’s tangible, measurable progress as Liverpool secured their spot in next season’s Champions League with an assured victory over Middlesbrough FC.

It was a nervy opening 45-minutes at Anfield; sitting back, defending in numbers and inviting intense pressure from their hosts, Boro took a page out of the “How to frustrate the Reds” handbook with murmurs around the stadium growing louder while results around the country conspired to push Jurgen Klopp off the big European stage — that is, until Georginio Wijnaldum did what he does.

The Dutchman loves a goal in a big game and with a spot under the bright lights at stake he ran on to Roberto Firmino’s clever pass before arrowing a shot past Middlesbrough ‘keeper Brad Guzan late in first half stoppage time. Keeping the tempo ticking after the break, Philippe Coutinho’s sublime free-kick would double their lead after Daniel Sturridge was up-ended by Adam Clayton before the hosts put the result well and truly out of doubt when a fierce counter-attack finished with Adam Lallana rolling the ball past Guzan to kick the celebrations in to high gear.

“We worked hard to get the first goal. We got more confident. We then scored from the free-kick and got even more confident,” explained Reds boss Jurgen Klopp, a smile playing across his face. “The boys then played some fantastic football. I’m really looking forward to next season. I think we have created a wonderful base. The better you’re organised, the more you feel free to do special things in offence,” added the German, already looking ahead to the Champions League qualifiers and the start of the next campaign. “I’m really happy about this – what a wonderful day.”

A spot in the Champions League qualifiers was the reward for a campaign punctuated by peaks and valleys; given what we saw after the turn of the year, it wouldn’t have taken much of a stretch of the imagination to see this one going sideways. Bundled over from behind by Dejan Lovren, Boro striker Patrick Bamford could have been awarded a penalty midway through the first half with the hosts still chasing the opener and that would have changed the match in ways I’d rather not consider. To be fair, the youngster could have had a hat-trick on the day, but that’s neither here nor there.

We don’t have to worry about what could have been — from here, we’re moving forward. Like I said, it’s not a title, it’s not even silverware, but a spot in the top four is the kind of progress that we all wanted when the campaign kicked off back in August. It’s a springboard; an injection of cash and drawing power in the transfer market will be the immediate benefits, but that’s not what it’s about.

I don’t have to tell you about the Reds long standing love affair with this competition; I don’t have to tell you about nights in Barcelona and Milan or welcoming the likes of Paris Saint-Germain and Bayern Munich to Anfield. The compeititon will be fierce and balancing a Premier League campaign alongside our European charge won’t be easy, but would you have it any other way? Would you have any other manager at the helm? A side as frustrating as they are awe-inspiring — that’s poetry in motion and it’s heading back to the continent.