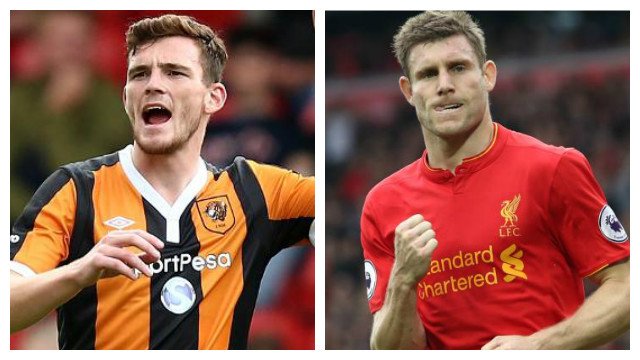 With a moves for the likes of AS Roma winger Mohamed Salah and Southampton man Virgil van Dijk already in the pipeline, Liverpool will have their ears perked up in their search for a new fullback with Hull City defender Andrew Robertson admitting that he could leave the KCOM Stadium this summer.

“The only thing I can really say is that all the players face uncertainty,” said the Scottish fullback, speaking to the press ahead of the match with England on Saturday. “There will be people moving on but, for now, I’m just focusing on this game in front of us. I do that because it’s so massive for the country. All I can do is play as well as I can on the day, and I’ll worry about my future after that,” continued Robertson. “I’ll sit down after this game with the people I need to talk to, and decide if it’s right for me to stay at Hull, or if I should look to move on,” added the 23-year old. “That’s not something I’m going to worry about until well into the summer.”

Faced with a player and management exodus after being relegated to the Championship, the Tigers face a tough summer with their top players ripe for the picking. Liverpool, for their part, are looking to add a bit of quality all over the park with competition and cover for James Milner near the top of the list. The Reds vice-captain, who filled in on the left flank as the Anfield outfit secured a spot in the Champions League play-off in August, has been a half-decent option, but not a long term one — though, with that being said, the 31-year old is happy to play wherever as long as he’s playing his part.

“Would I say I’m a left-back now? I’d probably say utility man,” said Milner, waxing lyrical. “I’ll play wherever’s needed. Wherever there’s a leak, I’ll plug the gap,” explained the former Manchester City man. “But I’ve always tried to learn throughout my career and I’ve played in a lot of positions anyway so it’s just trying to learn as best you can and trying to change the mindset from what you’re used to and to do the job as well as possible,” added the vice-captain. “It’s about whatever’s best for the team and ultimately I just want to be out there playing games, contributing and helping this football club.”