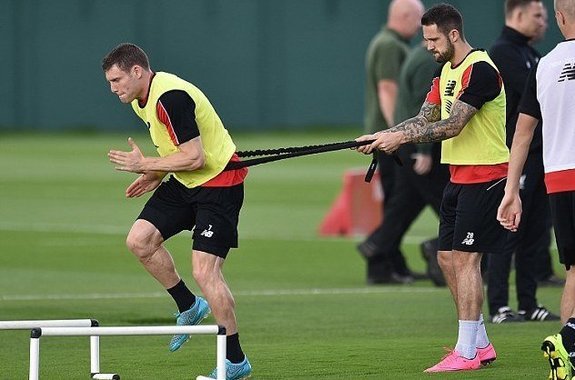 With pre-season training set to kick off next week, Liverpool vice-captain James Milner has warned that the party is over and that the Reds will have to get straight back in to the groove if they’re going to claim a spot in the Champions League proper for next season.

“The off season is always a funny one – you enjoy yourself and relax but you’ve always got one eye on pre-season and making sure you’re right and ready to go again,” he told the club’s official website. “Pre-season is always tough, nobody particularly enjoys it,” added Milner. “But with the tours and the [Champions League] qualifier we want to hit the ground running and start the season well. So it’s important you’re ready to go.”

Although the Reds are yet to find out who they’ll be facing in a Champions League play-off, it’s safe to say that any potential opponent could prove to be tricky — with a spot in Europe and all the perks that come along with it on the line, no one will need any extra motivation to put in a shift. While most of the conversation around Liverpool’s squad has been around who the Anfield outfit will be drafting in to supplement their push for both domestic and European silverware, they’ve got a key figure in Danny Ings set to return to first team training sometime in July after spending the bulk of the last two seasons sidelined.

Working through the summer, the 24-year old has put in extra work to make sure he’ll be able to play some role in Liverpool’s busy pre-season program. Injuries have restricted the former Burnley FC striker to a meager 11-appearances in the famous red shirt, though he’s been given the all clear by surgeon Andy Williams after he tore his the ACL in his left knee during a League Cup tie with Tottenham Hotspur in October. It’s going to be a long road back to the top, but Ings has already proven that he’s ready to work hard and he should be given his chances under Reds boss Jurgen Klopp this season.