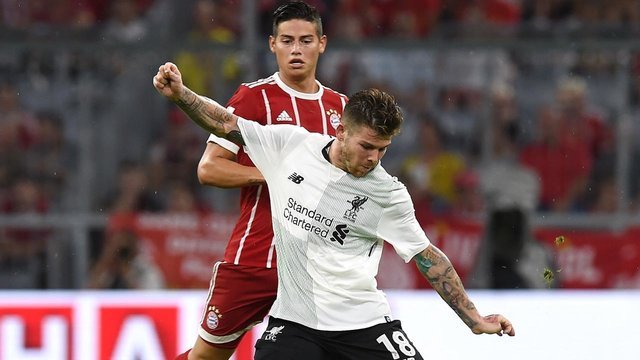 If this was last week, then there’d be little doubt that Liverpool fullback Alberto Moreno would leave Anfield this summer, but after the defender put in a stellar performance in the club’s eyebrow raising 3-0 win over Bayern Munich, there could very well be a stay of execution for the Spaniard.

“If he plays like he did today then yeah (he has a chance of playing). It was a really good game by Alberto. That’s why we kept him playing every second,” said Reds boss Jurgen Klopp, waxing lyrical on Moreno’s future. “He was playing better, he’s really fit. He had a little problem with his thigh but we had a test with him in the morning and he was okay,” continued the German manager before declaring, “The players decide themselves how many games they play.”

Having lost his spot to Reds vice-captain James Milner last season and facing increased competition after the club drafted in Scottish international Andy Robertson to stake a claim for a spot in the back-line, the Spaniard’s days at Anfield looked numbered. Italian side Napoli had expressed an interest earlier in the summer and Watford FC is sniffing around, but this one looks like it could go either way — a fact well known by the man himself.

“Many things have being said [about my future] but right now I am fighting for my position in the left-back,” explained Moreno, speaking to Cadena Ser. “It’s true that last season I did not play as much as I wanted but football is like that. One day you are up, another day you are down, continued the 25-year old., waxing lyrical. “I have to work from the first minute and let’s see what happens during the transfer window,” added the Spaniard, going on to confirm that La Liga remains on his mind. “Well, of course. You always miss your home, your country, the weather, the food… but I am happy here. Let’s see what happens this year.”