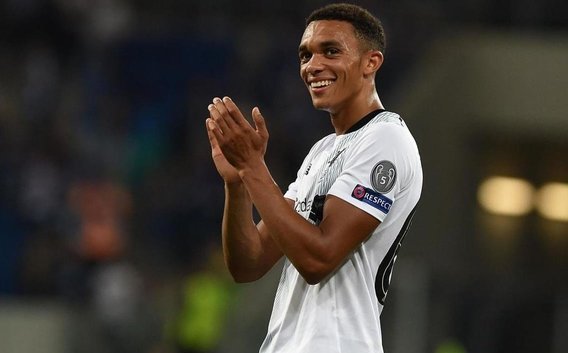 Bagging a goal in Europe is no small feat, but doing it on your debut is even more of an accomplishment so it’s no surprise that Liverpool fullback Trent Alexander-Arnold has come in for heaps of praise after the youngster’s spectacular free-kick against Hoffenheim on Tuesday evening.

“It was a fabulous free-kick and it’s ironic really because maybe Coutinho might have took this free-kick if he was available,” said Reds legend Steven Gerrard, a man who knows a thing or two about big European nights. “It was a fantastic strike and what a night for the kid. He’s played superbly well in general but to step up and have the character to take that before the likes of [Jordan] Henderson and [Sadio] Mane. It does say a lot,” added the former Liverpool skipper. “I know this kid well. He is going to be a top, top player. I think Nathaniel Clyne has to be very, very careful this season because he’s already breathing down his neck.”

There’s lots of love for Alexander-Arnold not only on Merseyside, but throughout the Liverpool support. A local lad who was trotting out on the pitch as a mascot not that long ago, the 18-year old has shown the kind of grit, determination and paitence that you need to make it to the top. With that being said, it’s a little early to start proclaiming him as the next Scouse messiah — we saw that happen with the likes of Martin Kelly and Jon Flanagan and it hasn’t worked out all that well for either of them.

“Well I have to say for an 18-year-old who has the balls to take a free kick like that it is rather exciting and interesting for me than a little mistake he did,” said Reds boss Jurgen Klopp. “It was rather an intense game for him, and he thought the goal was offside, but it was unfortunately not offside. I must say, I’d rather have a 2-1 than 1-0,” added the German manager, staying practical. “[The free kick] was actually because I told him he had to do it. He was the only one who can… he can shoot free kicks better than I ever could!”