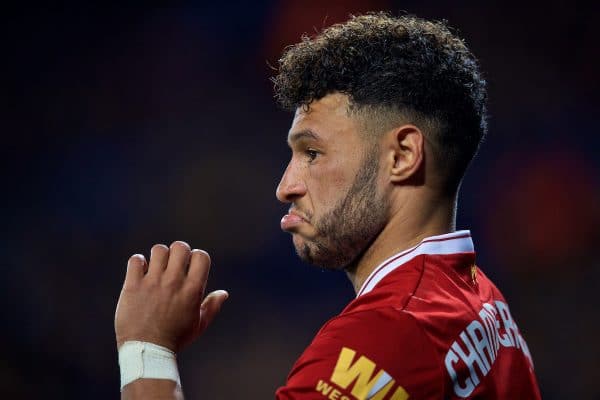 Set to return to the Emirates Stadium for the first time since his acrimonious switch from Arsenal on transfer deadline day, Liverpool midfielder Alex Oxlade-Chamberlain returns a player that never quite hit the heights that were expected from him throughout his years with the Gunners, but as one that’s beginning to show his worth under a new manager and a style of play that suits his particular skill-set.

Tipped at +1600 to strike on what will be a homecoming of sorts, Chambo bagging himself a goal will be a popular proposition as fans search all the top UK betting offers and portals to track down the best offer for their hard earned money. Heavily involved as the Reds ran out comfortable winners at Bournemouth over the weekend, the 24-year old joined in with the visitor’s blistering attack at every opportunity and though he didn’t find the net, it wasn’t for a lack of trying.

“I think the biggest improvement and potential for him is being involved in goalscoring situations. It is unbelievable but he was not asked for this too much in the past,” mused Reds boss Jurgen Klopp. “If you watch Arsenal in the past their two decisive players were Özil and Sánchez. They are involved in a lot of moments and decisive passes. Özil or Sánchez, then Giroud when he is coming on the pitch. Then you [the rest] are not much involved. Here we put it on more shoulders,” explained the German manager. “If he is on the pitch he needs to be involved in these situations. At the moment it’s all good but I also see there is space for improvement.”

Not long before jumping ship, Oxlade-Chamberlain had a stinker as ran out for Arsenal as a wing-back as they were trounced 4-0 by Liverpool at Anfield — a match where he was unceremoniously yanked off the pitch just past the hour mark. Now deployed in a more natural position in the midfield, the 24-year looks far more comfortable playing for the Merseysiders than he did lining up against them and while Gunners boss Arsene Wenger hasn’t exactly admitted his own culpability for putting him in the back-line to begin with, he’s also played it classy by refusing to scapegoat a former player.

“It would be not fair to put the defeat at Liverpool, where the whole team had a bad performance, on one player,” said the Frenchman when asked about Chambo’s performance on the day. “After that, on the other side, you analyse ‘did you make mistakes or not?’ You cannot go home and say everything was perfect when you lose like we did,” conceded the veteran manager. “I rate Alex highly and he knows that,” added Wenger, knowing his decision to allow him to leave could come back to haunt him. “After that, you want all the players to be respected who have played for us.”