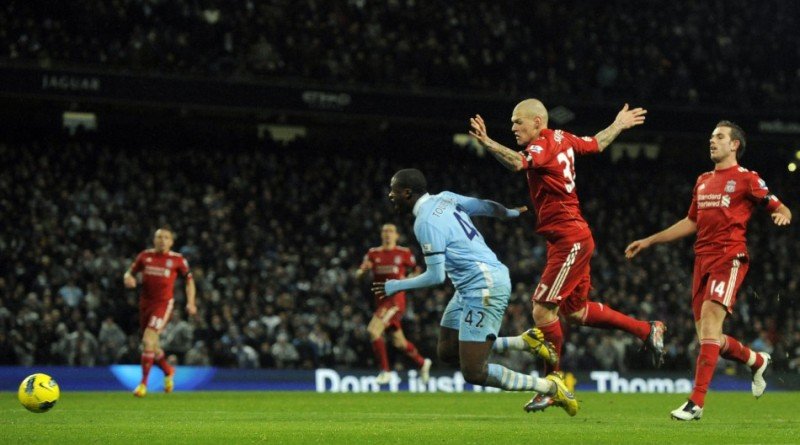 League Cup Match Preview
January 10, 2012 Steven McMillan 2 Comments Andy Carroll, Carling Cup semi-final, Kenny Dalglish, Manchester City, Roberto Mancini, Steven Gerrard, Stewart Downing, Vincent Kompany
There’s something about playing the same opponent twice in the same month that makes you groan. Now, don’t get me wrong; if it were the kind of mouth watering prestige ties that we’re all used to, things would be different. The Nou Camp sends shivers down the spine, the San Siro sets the mind ablaze; even the Allianz Arena sounds peachy to me. The Etihad Stadium though? Two more matches with Manchester City in the Carling Cup? That doesn’t quite get the heart racing the way you might expect. A shot at revenge for the 3-0 pasting the Citizens handed out last time we visited our neighbors is a tasty prospect, but it’s still the Carling Cup isn’t it?

Maybe I’m just a spoiled child, weaned on the glories of continental opposition and pining for those not so long ago days of yore, but I’m not all that excited to see us run out against those billionaire brats. A trophy hasn’t graced the hallowed fields of Anfield since the FA Cup triumph in 2006, so a semi-final with a growing powerhouse, even if they are domestic opposition, shouldn’t be anything to turn you nose up at, should it?

Even though we’re still alive in the FA Cup and will see the return of Manchester United to Anfield before long, City is unable to say the same as the Blue half of the town was the victim of a comeback victory against their more famous neighbors on Sunday. While the Citizens were getting the boot, we were resting comfortably after dispatching League One side Oldham Athletic on Friday night by a resounding 5-1 score line in a match that was marred by the racial abuse of Latics midfielder Tom Adeyemi by some knuckle-dragger in the Kop end.

Even Stewart Downing being arrested on suspicion of assault couldn’t overshadow the racism fracas as the club issued a firm statement, promising lifetime bans for anyone found guilty of being an idiot of the highest order. Moving on from that, the former Aston Villa winger is back on Merseyside after being released from custody, although his place in the squad after this indiscretion is questionable at best. Downing scored his first goal in a Red shirt on Friday with an injury time volley at the Kop end and his early chance to score against Manchester City remains one of the few highlights Liverpool fans will care to remember. Vincent Kompany kept things tidy at the back for most of the match, but after he earned himself a straight red in his side’s FA Cup defeat, he’ll be a missing man for both legs of the tie.

The City captain had words of praise for Andy Carroll after their last meting even though the England striker was kept quiet by the imposing Belgian. Without Kompany to keep him – uhhh – company, we may see the man from Gateshead exert a touch more influence on proceedings. Carroll got a much needed boost in confidence after finding the net with a vicious left footed drive on Friday. Kompany won’t be the only one missing; the Citizens will also be without brothers Kolo and Yaya Toure as the two prepare for the African Cup of Nations with the Ivory Coast. The resulting defensive gaps at the back could allow Liverpool boss Kenny Dalglish to employ a more direct style of play than in our last meeting. The return of Steven Gerrard, in particular, will give the gaffer another creative outlet to execute his plan.

The Captain showed no signs of rust during the meeting with Oldham and his return bolster a Liverpool midfield lacking in both attacking impetus and confidence. Gerrard shook off the penalty hoodoo and the crossbar jinx that’s plagued the Reds all season after converting coolly converting his spot kick on Friday night. With the new additions to the squad over the summer, there were some early season questions regarding the local boy’s place in the squad, but the last two matches have proved his place is his alone to lose.

Manchester City look to get back on track after being thwarted in their attempt to retain the FA Cup, but Kenny Dalglish will have a point to prove. The Liverpool legend will be looking to re-stamp his authority on those marquee matches and even though it’s only the Carling Cup, this competition proves to be Liverpool’s best chance of adding another piece of silverware to their already illustrious cabinet of honors. It might not be some glory tie with dazzling opposition, but for the interim, it’ll do me just fine.