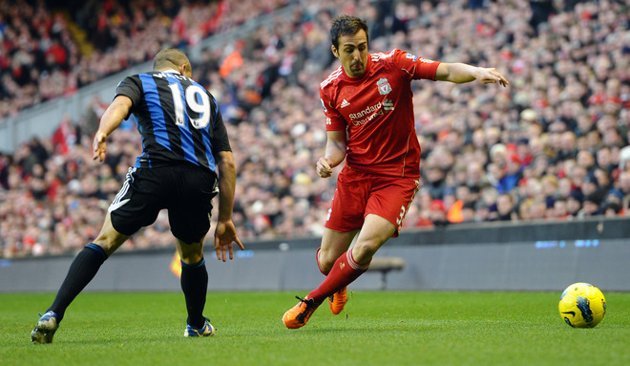 A drab 0-0 with Stoke that I actually fell asleep during? Should I even bother writing anything?

Anfield was once a fortress, but we’ve now left a total of 14 points on the pitch this season alone. We remain, along with Manchester City, the last team to go unbeaten at home. You can take solace in the fact that it’s January and we can still say that or you can drink back a tall glass of remorse and tally up the points.

Sure, we controlled possession, but like so many other occasions we did nothing of value with it. 75% of the ball and only 2 opportunities squandered by a severely out of form Dirk Kuyt to show for it. Downing was again out of sorts, Bellamy is too old for his knees to keep up with his ambition, Charlie Adam couldn’t pass the ball to himself and Steven Gerrard was stuck in the middle with you. Poor, piss poor if you’re going to be fair.

While other teams can grind out results as often as needed, we’re lacking that killer ball in the final third to make something, anything happen. We need to hit the net. We need to bang in a ping-ball deflection off Robert Huth’s butt. A scrappy, goal mouth scramble toe poked past Thomas Sorenson. A wag of the finger towards Tony Pulis as you streak past him, arms stretched wide and tongue waggin’ for the world to see. We don’t have it and we needed it yesterday. Last week. Last month.

It’s all good and well to blame the ref and think back on those penalty shouts. Those decent, 50-50 penalty shouts that went overlooked by Howard Webb, but the truth is, and stop me if you’ve heard this one before, we shouldn’t be relying on a decision going our way to pick up points. It’s not acceptable.

Call it what you will. A building phase. A transition period. A rough patch that’s stretched on for too long. Dalglish, when all is said and done, is the man to lead Liverpool forward. Too many thought the return of the King would herald happy times from here on out, but they skipped a few chapters ahead to the end of the story. Let’s just hope this one has a happy ending.