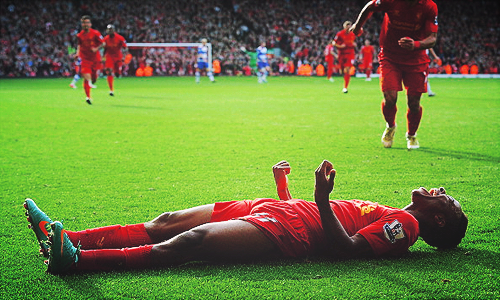 Analysis
October 22, 2012October 22, 2012 Steven McMillan 5 Comments Brendan Rodgers, Raheem Sterling, Reading, Suso
This season it’s been all about the youth. Brendan Rodgers has taken charge of one of the youngest squads in the Premier League and as the Reds begin to slowly rise up the table after some early season hiccups, it’s becoming apparent that the kids have what it takes.

While there’s been standout performances from Joe Allen, Andre Wisdom and Jonjo Shelvey, the two names that seem to be grabbing all the headlines are the youngest of the bunch — 17 year old Raheem Sterling and 18 year old Suso. Both players were in the side that saw off Reading at the weekend and both put in performances worthy of further review with videos by the extremely talented @MostarLFC and stats from EPL Index.

In the 85 minutes Raheem Sterling was on the pitch, the 17 year old managed to not only put in a Man of the Match performance, but he scored the only goal of a tense affair. Given our profligacy in front of the net, the youngster put up some pretty impressive numbers putting 3 of out of his 5 shots on target and having 2 of them blocked. Though he only took 1 shot every 28.33 minutes, he made each of them count. In comparison, Luis Suarez could put only 1 shot out of the 10 he took on net.

The gaffer singled out Sterling for individual praise after the match and it’s become apparent that the 17 year old has grown in leaps and bounds since finding his way into the first team. Brendan Rodgers values possession above all else and completing your passes is a huge part of that. Raheem certainly did his part completing 32 out of his 37 passes for a accuracy rate of 86% percent. Creativly, he was no slouch since 62% percent of his passes were in the attacking third and he completed 83% percent of them.

It goes without saying that we’ll continue to look for more of the same from the kid as his numbers continue to justify his place in the squad.

There were some concerns that 18 year old Suso could be on his way out of Anfield with interest from home beginning to tempt the youngster back to his native Spain. Thankfully, those concerns were quickly put the rest when he signed a new long-term contract earlier this week. With his immediate future locked to Merseyside, the stage was set for a starting berth in the side that won 1-0 over Reading at the weekend.

The youngster completed 22 out of 25 passes for a 88% percent accuracy rate and out of those 25 passes, 32% of them were played forward. Suso’s skills as a creative play maker were one of the things that first attracted former boss Rafa Benitez to him. With 58% percent of his passes being made in the final third and 87% of those passes finding their mark, time and first team experience are boding well for him.

Still, a slight improvement in front of the net is needed with 2 shots being taken and neither finding the net; though it’s hard to criticize him without looking at the rest of the team. Let’s just say very few fared better.

Gone are the days when you’d only see the kids in pre-season, the League Cup and in bit part roles. Brendan Rodgers has a footballing philosophy that the club is looking to build from the bottom up. While more established players may have the kind of experience only seasons in the first team can provide, the youth are hungry and eager to impress. Both Suso and Raheem have taken the managers words to heart and you can tell they are quickly adapting to the system and ethos the new era is bringing forth. We’ll be seeing more of them in the future and we’re all thankful for that.

Give our boy @MostarLFC a follow on the Twitter and get your mathematician on over at EPLIndex.com

5 thoughts on “Suso and Raheem Against Reading: Videos and Stats”