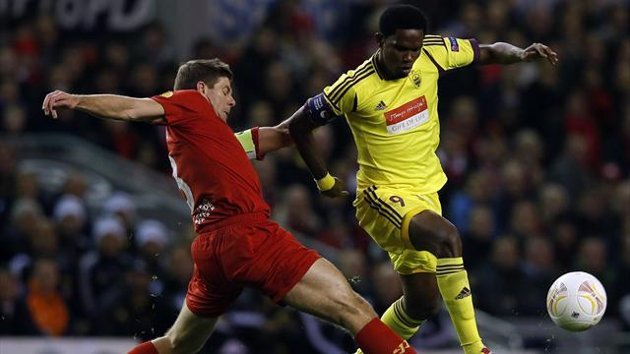 Europa League Match Preview
November 8, 2012December 8, 2012 Steven McMillan 4 Comments Adam Morgan, Anzhi Makhachkala, Brendan Rodgers, Chris Samba, Conor Coady, Europa League Group Stages, fringe players, Guus Hiddink, Joe Cole, Jordan Henderson, Samuel Eto'o, Stephen Sama, Stewart Downing, Yuri Zhirkhov
We’ve got a match with Chelsea this weekend that should be drawing our full attention, but before we make our way to Stamford Bridge, we’ve got a trip to Mother Russia and a Europa League meeting with big spending Anzhi Makhachkala to contend with. Way back when, I was pretty excited about being back in Europe; I’m now re-considering my position on that. As the fixtures pile up and their toil is inevitably taken, staying home and having a snooze sounds much more attractive than gallivanting around the continent. Brendan Rodgers has had plenty of opportunities to lament our thin squad as he ratchets up calls for re-enforcements in the January transfer window. He’s left a number of the big guns at home, but when you look at the quality of the players that have traveled, it’s not going to quiet the shouts at all.

Luis Suarez, Steven Gerrard, Raheem Sterling, Joe Allen, Nuri Sahin, Glen Johnson, Jose Enrique, Daniel Agger and Pepe Reina have remained on Merseyside as the boss keeps one eye firmly on the league and the other on his small squad. With opportunities in the Premier League being the goal, there will be a number of faces looking to impress tomorrow. Stephen Sama, Adam Morgan and Conor Coady have all traveled with the squad and although no one is guaranteed a starting place, playing for the first team in Russia is better than playing for the Reserves at home; or not playing at all.

Jordan Henderson is one of those players that will be looking to catch the boss’s eye tomorrow. The midfielder was a first team regular under Dalglish after moving from Sunderland for a reported £16mil, but he’s found his opportunities limited after being shunted to the background under Rodgers. With Jonjo Shelvey, Nuri Sahin and Joe Allen farther up the pecking order, Henderson has yet to start a Premier League match; though he hasn’t given up hope of winning back his spot in the side. He’s going to have another shot tomorrow against what’s going to be a very determined Anzhi Makhachkala side.

The Russians will be looking for revenge after a Stewart Downing strike sent Liverpool top of their group with a rare home win. Anzhi currently sit second in the Russian Premier League standings and have lit things up with their attacking play; a 3-1 win at the weekend bumped their goal difference up to +13 put them within 1 point of league leaders CSKA Moskva. Though top scorer Samuel Eto’o hasn’t scored in 4 matches, he remains the Russian sides’ most potent threat. The Cameroonian striker has 7 goals this season, but proved he has more to his game than just poaching when he bagged himself a pair of assists at the weekend.

Former Premier League players Chris Samba and Yuri Zhirkhov are both expected to start as Guus Hiddink looks to put his side back into the driver’s seat in their group. Rodgers, on the other hand, would probably bite your hand off for a draw. The thin squad spiel, though true, is getting a bit tiresome — so I’ll leave you with the news that Joe Cole has traveled with the squad and is expected to start. If that’s not a cry for help, I don’t know what is.