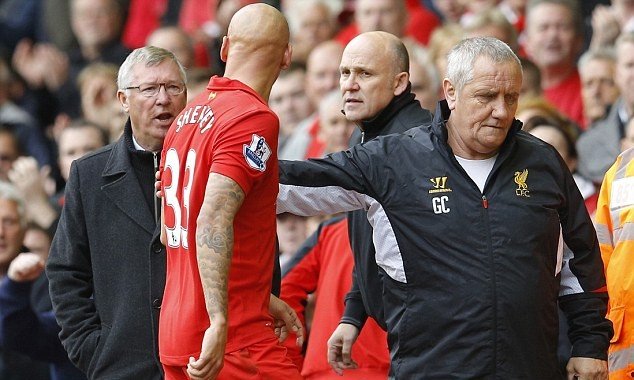 Match Preview Premier League
January 12, 2013January 12, 2013 Steven McMillan 1 Comment Brendan Rodgers, Daniel Sturridge, Howard Webb, Jonny Evans, Luis Suarez, Manchester United, Nemanja Vidic, Robin Van Persie, Sir Alex Ferguson, Steven Gerrard
It’s hard not to be bullish ahead of this one; though the majority of Liverpool fans have spent the season thus far keeping expectations in check and dining regularly on humble pie, a trip to Old Trafford stirs up the kind of feelings that aren’t so easily filed away for the “better days” that sit just over the horizon. We want smash them and we want to do it right now.

While the Reds have only tasted league victory once in our last 8 visits to Manchester — a gleeful 4-1 stomping orchestrated by Rafa Benitez in March of 2009 — the desire to turn the tide only becomes greater. It goes without saying that there’s no love lost between these two eternal foes; if you’re reading this now, it’s unlikely that you need a primer on this rivalry, but with United pulling away from Liverpool over the last ten years in terms of success, the war has become one that’s looking harder and harder to win.

Glory days or not, trips to Old Trafford have never been easy affairs. In even the most recent history there’s been eight red cards shown in the last 14 meetings between the two sides and though Sir Alex Ferguson hopes Luis Suarez doesn’t carry in with him the type of controversy he believes plagues the Liverpool striker, with Howard Webb taking charge of this already fiery fixture, the Uruguayan won’t be the only point of contention should something — anything — go down on Sunday.

Although he’s only been in the Liverpool hot seat for a short time, Brendan Rodger has been no stranger to defending Suarez against the jabs of rival managers and an overzealous media; not only is that part and parcel of the job, it’s also good for business. After a slow start to the season, the Reds have scored eleven goals in their last four league matches — and five of them have come from Suarez. You never want to alienate the man who puts the ball in the net and with the Uruguayan very much a contender for the Golden Boot with 15 league goals thus far, Rodgers is ready to taking a beating for the man up front.

Daniel Sturridge’s first goal and first appearance for the club may have been eclipsed by the handball winner from Suarez in the 2-1 win over Mansfield Town last weekend, but the former Chelsea striker could be thrown in at the deep end on Sunday after wading around in the baby-pool the week before. Whether the former Chelsea man makes it into the starting lineup remains to be seen, though it will come as no surprise to see Steven Gerrard pulling the midfield strings behind him. Like the Reds as a whole, the Captain endured a slow start to the season and as the side begun to find its feet, he’s stepped up along with them and chalked up 8 assists so far this term. Though he’s relishing his new withdrawn role, it’s vital to point out that the heartbeat of this side has scored five goals in his last seven matches against United and there’s no question that he’ll do everything possible to improve on that tally.

We’ve certainly improved over the last few weeks in front of the net, but patting ourselves on the back for the consistency of the Captain, the explosiveness of the Suarez and the potential of Sturridge is ill-advised as we still have one very large hurdle to overcome in stopping Robin van Persie. The Dutchman has scored five goals in his last six matches against Liverpool and has racked up an impressive 16 league goals in 18 starts for United this season. Former boss Arsene Wenger and Manchester City manager Roberto Mancini have called him the difference in the title race and they can add the FA Cup to that list as well when he came on to rescue a replay for his side last weekend when they were trailing 2-1 to West Ham United.

For the first time in a long time, the United defense has looked porous to the point of fault with both goals they conceded last weekend being the direct result of some shoddy work at the back; not that Liverpool should do any finger pointing in that department. The returning Nemanja Vidic was certainly not as his best and could be a liability if he’s not firing on all cylinders come Sunday. The more mobile Jonny Evans could take the Serbian’s spot in the side as Ferguson looks to shut down the significant threat posed by Suarez and keep the Uruguayan off the score sheet. Not having Vidic on the pitch also means he can’t be sent off the pitch, but I digress.

It’s cliché to say that the form book goes out the window for a derby, but it’s about as true as it gets. While United are pre-destined to finish above us this season — and with all likelihood, for a few more seasons to come — its skirmishes like these that give us an opportunity to knock a tooth or two out of that winning smile. Wars aren’t won in one fell swoop; if we can’t win the title, we can do everything we can to dent their chances on a battle by battle basis. Rally the troops, this is it.