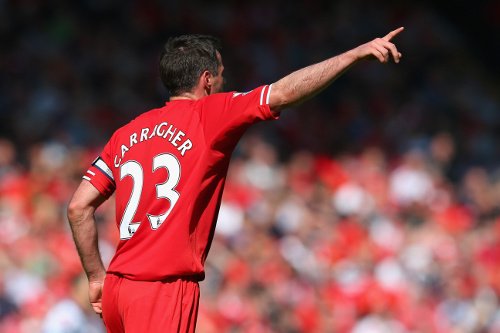 Philippe Coutinho would seal the points with a audacious strike in what would fittingly be the twenty-third minute of play, but Carragher — already the man of the hour — would come within inches of stealing the show with a forty-yard bomber in the second half that would ping off the upright with QPR ‘keeper Rob Green well beaten. It looked to be a fine way to cap off a glorious career spanning sixteen illustrious years; but Carragher was never about that anyways, was he?

In the end, it was only a win for the team that mattered to Number 23 and with the fate of both teams already decided, the focus was squarely on the Bootle defender as the pre-match song selections he picked out rang out over the Anfield loudspeaker and a guard of honor brought a deafening cheer from the supporters who’d come to say goodbye to one of their own.

For the team, the focus was sending their compatriot off with a win and Coutinho looked to have set them on their way with a diving far post header from a Stewart Downing corner merely two minutes into the match only to have the effort incorrectly ruled out as the ball was cleared just as it trickled over the line. When goal-line technology is introduced next season, the Reds would have been ahead; still, the signal of intent was exactly what you wanted to see as Liverpool continued to press the visitors.

Minutes later, Loic Remy, finding himself in the starting lineup after a difficult week, tried to win himself a penalty with a bit of funny business, though his appeals would fall on deaf ears. Jordan Henderson would be booked for a poor, late tackle on Ji-Sung Park and Glen Johnson would leave Armand Traore flummoxed as he sent in a teasing cross for seventeen year old debutant Jordan Ibe, but the youngster would fail to connect as the match began to heat up. Ibe, signed from Wycombe Wanderers 18 months ago, was a surprise inclusion in what was a particularly young squad today and he would repay the managers faith by playing a key role in the opening goal.

There’s always concerns that academy players will be overwhelmed by the task at hand when they finally get a shot in the first team, but Ibe quickly settled any debate on whether he’d come down with a case of the spotlight jitters.

Carrying the ball with the confidence of a seasoned professional, the Bermondsey born attacker would try a bit of trickery before finding our resident Number 10 in space. He may have been denied twenty-one minutes earlier, but Coutinho would put the Reds ahead — in the twenty-third minute from about 23 yards out — with an effort that took a skip across the pitch right before slipping past Rob Green.

Carragher got in on the action as Stewart Downing played a short free kick and the defender was able to have a pop on net, but his goal bound effort was blocked on the way through. Traore would test the Liverpool backline with a good cross and with Bobby Zamora beating Martin Skrtel to it, the English striker came close to pulling one back for the Hoops; thankfully, he couldn’t make contact as the ball skipped past him across the face of goal.

Into the second half, both Jose Enrique and Glen Johnson would have the opportunity to add to the lead as QPR struggled to contain Liverpool’s overlapping fullbacks. Coutinho — involved in almost everything today — would keep the pressure up when he dinked in a lovely lofted ball for Stewart Downing to knock down for Daniel Sturridge; unfortunately, the England striker wouldn’t build on his impressive display at Fulham last week as his impressive half-volley was blocked off.

Carragher looked to have added a cushion to the Reds lead when the defender — having been urged to shoot by a baying Kop — sent in what might have been the best shot of his career from forty yards out that crashed agonizingly off the crossbar. “I think I would have just walked straight off if that had gone in” said the defender during an emotional post-match interview, though he’d play on as his side went in search of another goal.

Mere seconds later, Coutinho and Jordan Henderson would both come close and not long after, Sturridge would be blocked off as the Reds piled on the pressure, but Rob Green continued to keep the Hoops alive. Suso would replace the Brazilian and with just over ten minutes remaining, the Spaniard would try to emulate his teammate with a long range effort, but his tame shot would be easily gathered by the QPR ‘keeper.

In the 85th minute, Jamie Carragher would leave the pitch for the last time as a Liverpool player to a well deserved standing ovation as he was ceremoniously subbed out for Sebastian Coates. Jamie Mackie could have spoiled the festivities in the final minute of stoppage time, but the striker couldn’t find the breakthrough and a true Liverpool legend would be get the kind of send off any defender dreams of — three points and a clean sheet for his side.

“I’d like to say thanks to all the supporters here today. I’ve had lots of great times” said Carragher as he closed out a career that won’t soon be forgotten. With nothing on the line, this match didn’t mean all that much when we sum up the season, but it meant a lot to Carragher because he means so much to us.