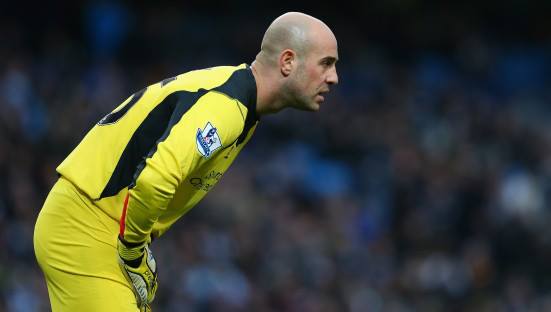 Editorial
July 22, 2013February 18, 2014 Steven McMillan 0 Comments Brendan Rodgers, loan deals, Pepe Reina, Rafa Benitez, Simon Mignolet, SSC Napoli
Nothing in life is a sure thing and allowing Pepe Reina to join Napoli on a season long loan is certainly one of those intangible variables that have made brows furrow across the globe. Loaning out the likes of Suso, Jay Spearing and Dani Pacheco — completely understandable. Pepe Reina, on the other hand, may seem, at first anyways, like a bit of a stretch.

While most of us understood that the signing of Simon Mignolet from Sunderland meant that Pepe’s time at the club was drawing to a close, the news that he would be joining former Liverpool boss Rafa Benitez on loan still came as a bit of a shock. In the beginning, strong claims from Rodgers that the Belgian ‘keeper was signed to provide competition for Reina were obvious white lies at best, but is the outrage surrounding his season long move to Italy, which will eventually lead to a permanent exit from Anfield, even warranted? Weren’t we resigned to losing him to Barcelona anyways?

Although the deal has yet to be finalized, it’s only a matter of time and Liverpool boss Brendan Rodgers has confirmed that one of the driving factors behind the decision to allow him to leave was financial – but that should go without saying. “Financially it was something that we needed to look at,” said the Ulsterman when asked about the reasons for the Spaniards departure. If the torch is going to be passed to Mignolet to take over as first choice ‘keeper, would it make sense to have a player that makes in excess of £100,000 per week sitting on the bench? That would be utter foolishness.

I don’t need to spend paragraphs expunging on the benefits of Simon Mignolet – that’s been done for me and far better than I ever could – and I urge anyone who has any lingering doubt surrounding the Belgians ability between the posts to do their research and read the comparisons; the numbers are there, they’re real and they’re hardly disputable. Despite “doing the Dudek” in Istanbul, Jerzy Dudek was shuffled to the bench as Rafa Benitez brought in Reina to replace the erratic Polish ‘stopper and after the initial grumbles, no one ever looked back. I’ll stop short of decrying the lack of love and loyalty in modern football; players have little time for sentiment and clubs, often portrayed as the bad guy, need to take the same stance — especially when you’re a club in Liverpool’s position.

Obvious and very poignant questions have been raised regarding the clubs ambition and stature in regards to letting a player such as Pepe just walk out the door, but all of that needs to be taken in stride and put into context. The romanticism of allowing him to leave and rejoin Barcelona – a club near and dear to his heart – may have softened what would have still been a blow, but now that it’s not Spain and not Barca, it becomes more of a cold, hard financial decision and makes it seem almost callous; but regardless of destination, this is primarily a footballing decision and that’s always how it was going to be.

It’s hard to speculate on how the money saved on Pepe’s wages is going to be spent or if it will even be made available to Brendan Rodgers. The manager has spoke of the need to strengthen the squad and how our transfer business isn’t quite done yet and that, on the surface anyway, remains a priority as the transfer window drags on. The freed up wages could be earmarked for a marquee signing or spread out among a few – again, it’s hard to say for sure, but if the top four remains our target for next season, we’ll need to bring in a few more players if we’re going to have a shot.

After being in the woods for so long, finding your way back into the Champions League is a hard ask and doing so while trying to build a young team with a financially sustainable model is an even bigger ask. The effects of Financial Fair Play are only beginning to be felt and tough economic decisions need to be balanced with pragmatic, calculated spending. Keeping someone that’s not going to be contributing to their fullest potential and has yet to recapture the kind of form that made them a player worth paying out and exorbitant sum for just doesn’t make sense. Granted, Pepe going to Napoli represents a strong voice in the dressing room that will be lost. It’s a calm head in the face of increasing pressure that will be missed and a wealth of invaluable knowledge for the younger players that will go missing. Those are the kind of things that are hard to put a price tag on and what will likely represent the biggest blow to the squad as a whole – and that is the nagging factor that makes this move hard to reconcile.

No one wants to say goodbye to Pepe. The man loves the club, the fans and the city and will always bleed Liverpool red; still, it’s time for a change. Although relying on Simon Mignolet to hold down the fort presents a very real risk, I believe it’s one we have to take. Reina leaves large gloves to fill, but, we’re being left in good hands.