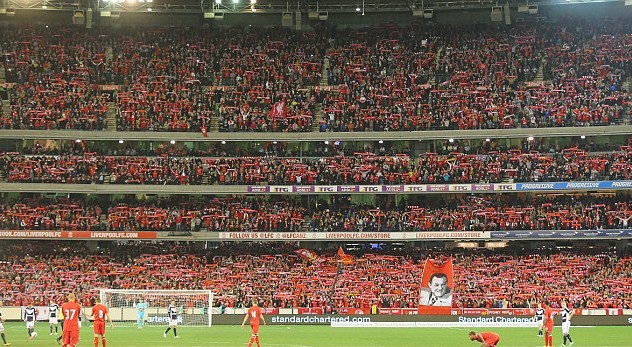 We’re not going to win the league – not this season anyways and that’s a nailed on certain. The cry of “next year” has become the familiar siren song of the Liverbird, but we’ve fallen out of the tree enough times to know we need to learn a new tune. A much improved haul of points and a fifth place finish seems like a fair shout, but still not exactly where we want to be when the end of May rolls around. The Champions League spots are and always should be the goal…

…and maybe we’ll end up there. The transfer window doesn’t close until the 2nd of September and what I write today, same as any other day, may not matter in a week or even an hour’s time. After finishing a disappointing seventh in the league – one place behind local rivals Everton – last season, the summer kicked off with a number of changes aimed at building on the surge of positive play we were experiencing during the second half of last season and, with renewed focus, plugging up the holes that continue to leak.

The only way to rack up more points is to turn losses into draws and draws into wins; as simple as that sounds, it’s certainly not as easy as just recognizing and addressing your deficiencies. If the Reds are going to make a sustained push, or in the very least improve on last season’s results, Brendan Rodgers will have to play to his teams strengths and, as we saw in the tail end of our last campaign, scoring goals is something this side is capable of with both Luis Suarez and January addition Daniel Sturridge making a significant impact in front of the net. Rodgers has talked of his desire to add even more goal scorers to the side and big money moves for the likes of Henrikh Mkhitaryan and Diego Costa showed that his words weren’t just baseless rhetoric; although we failed to bring in either player, the addition of Iago Aspas from Celta Vigo at the beginning of July could prove to be an astute move without all the big-money expectations.

The Spaniard netted 12 times for the Premiera Division side last season as the club barely avoided relegation in May and has already gotten off to a flier in the famous Red shirt with a number of assured performances that saw him not only find the net with regularity, but chip in with a handful of assists. Though it may take him, as well as compatriot and former Sevilla attacker Luis Alberto, time to settle into the rough and tumble style of the Premier League, Rodgers has recognized in both players the technical ability and diversity of skills needed to excel in our system; in many ways, that’s better than a expensive one trick pony who’s unable to cope with the demands of possession based football. Maybe it’s sacrilege to expect a striker to do more than finish, but in this team, they need to create as well.

With a strike force that includes Sturridge, Aspas, Borini and – god willing — Suarez, we have a fluid set of forwards that are able to finish as well as assist. We’re also able to boast a midfield that includes the likes of Steven Gerrard, who will Captain his side against Stoke for the opening match of his 16th year in the Premier League on Saturday, Jordan Henderson, Raheem Sterling and Brazilian playmaker Philippe Coutinho, who are all more than capable of pitching in with crucial goals from the middle of the park. While they certainly have the potential, not to mention the raw ability, to find the net when given the chance, they too will have to play double duty by chipping in more on the defensive end. We may see a shift in the role that Lucas and Joe Allen are expected to play as Brendan Rodgers looks to his more defensive minded midfielders to control the ball rather than destroy the opposition, but regardless of the success or failure of this tactical switch, we need to be stronger on the back-foot and that starts farther up the field.

Although the signings of both Aspas and Alberto show promise going forward, it’s the capture of former Sunderland ‘keeper Simon Mignolet that represents the most significant step – thus far anyways – to addressing the Reds problems at the back. The arrival of the Belgian meant that Pepe Reina, once regarded as one of the best in the business, was free to be loaned to Napoli as his performances between the sticks no longer warranted his very large pay packet. Mignolet, regarded as one of the most promising shot stoppers in the Premier League last season, will be expected to hit the ground running and provide the kind of assured displays at the back that Liverpool have been lacking for a few seasons. No one player can do it all themselves though and the Reds will need to show more defensive steel if this particular transfer is going to be deemed a success.

As Jamie Carragher called time on his career in May, pertinent questions were raised regarding a potential replacement and as Brendan Rodgers focuses on signing young, but promising players, the lack of experience in the dressing room was addressed with the addition of seasoned veteran Kolo Toure. If Martin Skrtel continues in the same vein of form that kept him relegated to the bench for the business end of the previous campaign, the Ivorian could prove to be the perfect partner for Daniel Agger; that is, if the new vice-captain is still at Anfield come September 2nd. A new, younger addition to the defensive unit is expected before the window closes, but we can only work with what we have at the moment and should Skrtel find his bearings again, then the capture of Toure has not only brought experience back to the fold, but also succeeded in providing competition for a starting berth in the heart of the defense; something that’s also needed for the flanks.

Few would argue that Glen Johnson is the best right back the club has had in a number of years and in both Martin Kelly and Andre Wisdom, the club has adequate cover – though both would be playing out of their natural roles — should the England international befall an unforeseen injury. The same is unable to be said for Jose Enrique with the Spaniard being the only recognized senior left-back at the club and the only viable choice, at this time anyways, for that position. A squad is never complete, but the best ones always have competition for each and every position; ours, it goes without saying, isn’t quite up to the standards the manger wants — as we can see, this hasn’t been for a lack of trying.

Our struggles in the transfer market have been indicative of the clubs current stature. It’s hard to attract top shelf talent when you’re not playing in Europe and looking to build a sustainable squad that falls in line with the new Financial Fair Play regulations. Re-enforcements have been promised, but with only a few weeks left in the window, finding the right players for the right price will prove to be a headache and we may go into September without a fully formed squad; this, unfortunately, is a fact we’re going to have to live with — really we have no choice.

We’ve been taking the long way around for twenty years now and the road isn’t looking any shorter from where I’m sitting; but at least we’ve found a map. Whether it’s the one that will lead us back to the top remains to be seen and the fruits our their labours — if they will even reap any — won’t be apparent for some time and that’s just the way things are going to be. I have my own misgivings about the incumbent regime, but that doesn’t mean that I don’t have faith that what they’re doing makes sense from an economical and footballing standpoint; and that, I’m somewhat ashamed to say, is better than what we’ve had far too often in the past. This season won’t see us reclaim the crown we all so desperately want — it’s just another another mile in a long, hard journey. The trip, as they say, is half the fun.

We’re looking forward to the new season and we hope you are too. There’s more to come this year and we hope you keep coming back. You keep reading and we’ll keep writing.